On 29th of December, Center for Monitoring and Research awarded diplomas to participants of the III generation of School of Euro-Atlantic Integration for Youth. The project has been implemented by CeMI from September to November 2014, with support of Commission for the allocation of the revenues from the lottery in 2013 and Council for NATO Membership.

The attendees of the School were awarded diplomas by Colonel Zoran Lazarevic, Cheif of Staff of the General Staff at Army of Montenegro.

At the beginning of the ceremony, Mr. Zlatko Vujovic, President of the Governing Board at CeMI, addressed the participants. Vujovic pointed out that CeMI, through this project, provided atendees with basic knowledge about the content and aspects of the process of Euro-Atlantic integration of Montenegro, the nature and content of the process, as well as the advantages and disadvantages that this process entails. Users of this project were members of the youth council of political parties, members of NGOs, journalists and students, who are socially engaged, and who are up to 35 years of age.

Through implementation of above mentioned actvities, CeMI gave attendees the opportunity to acquire and improve the knowledge about NATO organization, structure and competencies of the Alliance, its role in the world, steps to become a member as well as the advantages and disadvantages that this membership brings. In this way, the project has contributed to increase the awareness of Montenegrin citizens on aspects of integration process of Montenegro in Euro-Atlantic structures, as one of the most sensitive issues when it comes to the implementation of foreign policy goals of Montenegro.

Mr. Vujovic emphasized that, despite numerous activities and fulfillment of political and legal criteria, as well as standards of interopperatibility, citizens of Montemegro remain underinformed about conditions and consequences of full-fledged membership in NATO, which results in low level of support for euro-atlantic integration. Since membership requires support of majority of citizens, CeMI will continue to conduct activities aimed at informing citizens about NATO integration.

Vujovic used this opportunity to announce relaization of fourth generation of School of Euro-Atlantic Integration for Youth in 2015.

Colonel Zoran Lazarevic emphasized the importance of the issue of security, and commened activities of the Center for Monitoring and Research in the field of Euro-Atlantic integration, with particular emphasis on increasing support for NATO membership. Colonel Lazarevic added that these or similar activities will be crucial to continue to meet the necessary criteria and standards on the way to the Alliance. 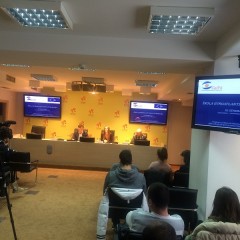 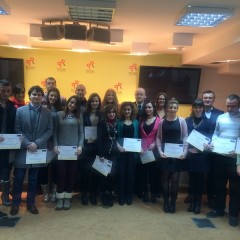