Round table on plagiarism held

Round table „Instruments in the fight against academic fraud“, organized within the project „Strengthening of Think Thank capacities in fight against corruption“ funded by Think Thank Fund from Budapest was held by Center for Monitoring and Research On 29th December.

On Round table was presented Practical Policy Brief „Plagiarism in Montenegro: Corruption which we forgive?!“, in which were presented, in short form, problem of plagiarism as a form of academic fraud which is, according to our researches, very widespread form of corruption in society. This Brief comprises five parts: problem description – where is selected definition which best corresponds to academic plagiarism, description of legal framework which regulates plagiarism issue in Montenegro, analysis of the situation in Montenegro in fight against plagiarism of academic papers, examples of good practice in fight against plagiarism and recommendations for improvement of situation in this area.

Participants of the Round table agreed that problem of plagiarism in our society is very serious and universities don’t have enough will to detect and sanction plagiarism of scientific work. Mr Zlatko Vujovic emphasized that the main problem is not existence of plagiarism, but the lack of enthusiasm and courage to conduct the process until the end. Miss Mubera Kurpejovic, General Director of Directorate for Higher Education, explained that new Law on Higher Education treats problem of plagiarism. Miss Ana Selic presented eight recommendations for fight against plagiarism. President of Student Parliament Milos Pavicevic as a main problem emphasized the lack of disciplinary Commission which will determine whether the student use illegal means during exam. 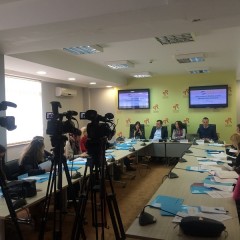 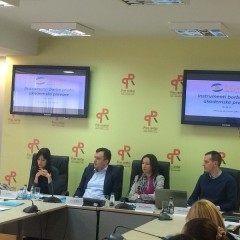