The event has been organized within an international project Balkan Electoral Comparative Study: Impact of Personal Vote on Internal Party Democracy, implemented within the Regional Research Promotion Programme in the Western Balkans (RRPP), funded by Swiss Agency for Democracy and Cooperation SDC conducted by the University of Fribourg. This project is being implemented in Western Balkans countries, in co-operation with Faculty of Political Sciences, University of Belgrade, Kosovar Think Tank KIPRED, and group of experts from Bosnia and Herzegovina, under mentorship of international team of experts in the field of electoral systems research from the University of Lausanne and the Swiss Centre of Expertise in the Social Sciences (FORS) whose members are Georg Lutz, Brian Kleiner, Nicolas Pekari, Josep Colomer, Åsa Bengtsson and Ioannis Andreadis.

M.Sc. Milutin Simovic, Vice President of the Parliament of Montenegro, and M.Sc. Zlatko Vujovic, President of the Governing Board at CeMI, addressed participants in the opening speeches. Mr. Vujovic emphasized that realization of this project was very significant, because the results of the Comparative Candidate Survey conducted within this project, showed that most of the candidates for MPs in Montenegro support the idea of introduction of preferential voting into the electoral legislation. He found that this solution would be very suitable for the state of Montenegro, due to high level of centralization in the decision-making process. Vice President Simovic stressed out that 15% of MPs in the Parliament of Montenegro were independent MPs who left their primary caucus, which was a clear indication of lack of trust within the parties, rather than lack of citizens’ trust in the electoral system.

The Round Table was consisted of two panels: “Reform of the Electoral Legislation: Chances and Models“ and “Internal Party Democracy: Experiences and Practice of Political Parties“. The participants of the first panel were Mr. Rifat Rastoder, President of the Parliamentary Committee for Political System, Judiciary and Administration, PhD Boris Vukicevic, professor at the Faculty of Political Science, Ms. Azra Jasavic, Vice President of the Positive Montenegro, Mr. Andrija Popovic, President of the Liberal Party, Mr. Resad Sijaric, MP of the Bosniak Party, and Mr. Vlado Dedovic, Head of the Legal Department at CeMI and member of the State Electoral Commission. The panellists presented their views when it comes to potential modification of the electoral system through introduction of preferential voting, by concluding that it – in general, this would be a good solution.

During the second panel, PhD Vladimir Goati presented his understanding of internal party democracy in Montenegrin political parties, from a rather theoretical perspective. On the other hand, practical experiences and statutory solutions that define internal party democracy were addressed by representatives of political parties: Mr. Predrag Sekulic, Democratic Party of Socialists, Mr. Rade Bojovic, Vice President of the URA, Mr. Vladimir Martinovic, Vice President of the Democratic Montenegro, Ms. Jelena Radenovic from the Socialist People’s Party and Mr. Dritan Abazovic, an independent MP in the Parliament of Montenegro. The general estimation of the participants was that the recent fragmentation of political parties in Montenegro was mostly caused by low level of internal party democracy. 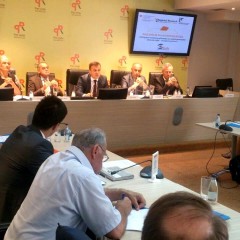 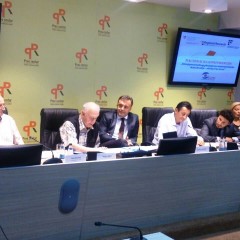