The panel “Anti-corruption Agency – are we ready?” was held 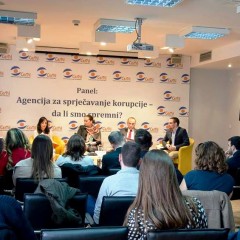 The panel “Anti-corruption Agency – are we ready?” was organized by the Center for Research and Monitoring (CEMI) at the premises of PR Center on March 9th, in order to present an analysis of the beginning of the Anti-corruption agency, conducted by civil society organizations in Montenegro. The event was organized within the project “Strengthening the Capacity of the Department for Public Policy Research of CeMI”, funded by the Think Tank Fund from Budapest.

The aim of the event was to present the findings and views of civil society on the legislative framework and the beginning of work the Agency. The research team of the Center for Monitoring and Research did a brief analysis, entitled “Agency for prevention of corruption – are we ready?”, Which was presented at the event.

The joint attitude of NGO representatives who spoke on the panel was, among other things, that sessions of the Council of the Anti-corruption Agency should be public, and this institution must find a model of cooperation with civil society.

Director of the Department for Public Policy Research of CEMI, Ana Selic, said that transparency is one of the biggest problems in the Anti-corruption Agency.

“First, the sessions of the Council are not public. Model of cooperation with civil society has not yet been established. Council members approve the presence of the civil sector before each session. As they adopt by-laws on financing of political parties, the civil sector is not allowed to attend the session on that, although some of them participated in the creation of an umbrella law”, said Selic.

The work of the Agency, as stated, is obstructed by the constant conflicts within the Council.

“There are potentiated situations where one member of the Council was elected contrary to the Law on Internal Audit Institution”, said Selic.

She added that there is a steady public pressure because of the election of directors of the Council.

Selic pointed out that two months after the establishment, the Agency has not yet fulfilled all systematized positions in the institution.

“At the Agency’s website there is information about only 23 employees, and we got information from these institutions that there have recently employed 17 more, which means that there are still 15 vacancies. One process of public procurement is opened and the adoption of bylaws started ” said Selic.

CeMI, as she pointed out, proposes to harmonize the definition of public authorities in the Law on Prevention of Corruption and the Law on Lobbying to provide administrative investigation by initiating proceedings ex officio, as well as to refer to the Administrative initiatives with all existing complaints on the election of members of the Council as well as the election of directors of the Agency.

“What we suggest is to do the analysis of the needs of the Agency and to create a draft budget for next year based on that. It is necessary to fill all systematized positions”said Selic.

President of the Governing Board of the Institute Alternative, Stevo Muk, said that the government and the opposition signed “rotten compromise” on who will be elected to the Council of the Anti-Corruption Agency.

“That rotten compromise is the result of internal political dynamics, but unfortunately it was the result of external criticism. Now, neither the government nor the opposition, which should be of interest, doesn’t have justification for the argument that simply seeks to reform the agency and that all this has returned to its natural beginning, “said Muk.

Director of Program Monitoring and Analytics in Network for Affirmation of NGO Sector (MANS), Vuk Maras, believes that for the director of an institution that should deal with prevention of corruption was elected “the man with the worst references in this competition.”

“A man with such a biography, which does not in one of its segments meet the requirements, who shouldn’t even be an incumbent, and not a director, was elected as the head of the Agency as a result of the rotten political compromise of the majority in the Council,” said Maras.

He believes that the citizens of Montenegro, instead of the long-awaited independent agencies of corruption, got a “private company of Dusko Markovic.”

“Montenegro has two options – either to do everything so the Agency becomes truly independent or to continue to be a private company of Dusko Markovic,” said Maras.

President of the Center for Democratic Transition (CDT), Milica Kovacevic, believes that the Agency could make strides in increasing transparency by improving existing data base of officials’ public property records.

“It’s a whole history, it’s ten years of data for thousands of officials, which unfortunately not updated. Currently useless, but it could be the knowledge of the society and serve for further policy planning, “said Kovacevic.

Assistant of Director of the Anti-Corruption Agency, Svetlana Rajkovic, said that the elections in Tivat are great moment for the testing of all capacities and institutions.

“Systematization had to happen and with this systematization we predicted five seats in the department of political party financing. At the very beginning we have four of the five officers in this department, next week we will call a public invitations for all remaining vacancies. I think we have managed to ensure 17 people pretty fast, in just two months “, said Rajkovic.

Within the institution, as she added, there is an internal agreement that the three officers from other departments should be involved in the work on controlling and the financing of political parties.

“These local elections will show us how many people we need and how much knowledge we’re missing, which is in my opinion much more important,” said Rajkovic.