The first meeting with the decision makers at the national level 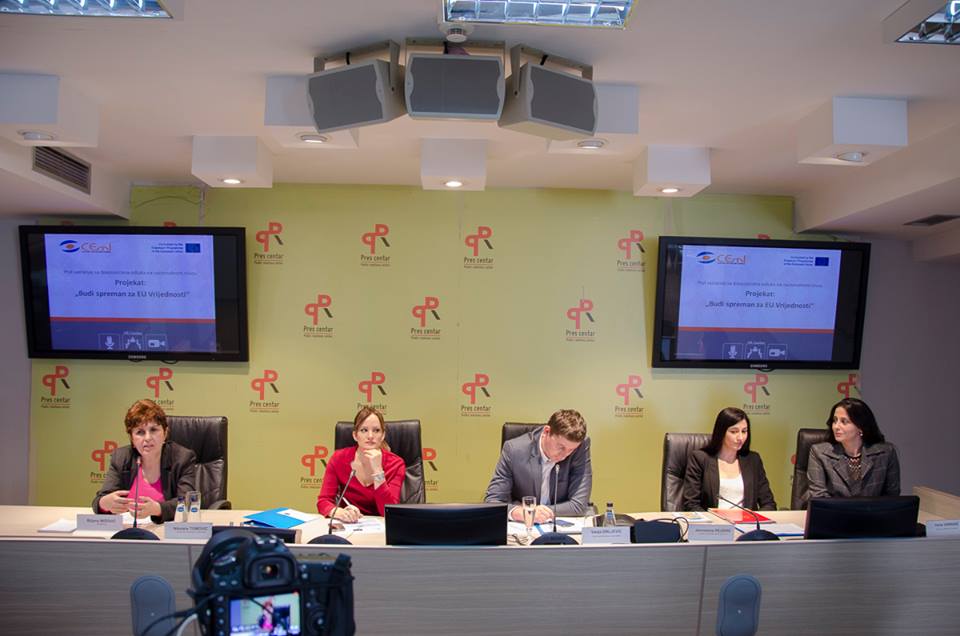 The Centre for Monitoring and Research on Monday, 11th  April 2016 in PR Center, starting at 10am, organized the first meeting with the decision makers at the national level in the framework of the project “Be prepared for EU values.” At the meeting were representatives of state bodies, NGOs, students and student organizations in order to lead a discussion about the key challenges of youth development in Montenegro, with special emphasis on the achievement of European values, comparing European experience with the current situation in Montenegro, identifying key areas and policies for promoting and providing further support to the reform process and the like. Accordingly, the meeting was attended by representatives of the Ministry of Education of Montenegro, Employment Agency of Montenegro, the Montenegrin Statistics, National Erasmus + Office, as well as representatives of non-governmental organizations dealing with the situation of young people in Montenegro, and themselves of student organizations.

Policy makers in Montenegro should make greater efforts to make personal achievements of individuals and equal opportunities for all the values that govern the employment of young people, said the executive director of the Center for Monitoring and Research (CeMI), Nikoleta Tomovic.

A representative of the National Erasmos plus offices, Ranko Lazović, said that investing in the education of young people in new skills and competencies to benefit individuals, organizations and institutions, as well as society as a whole.

Head of the Directorate for Higher Education, Ministry of Education, Biljana Mišović, said that despite the fact that the education level of Montenegro allocated 4.2 percent of GDP, young people who have a Bachelor’s Degree have problems when you switch on the labor market because employers do not recognize that diploma, stating that this is especially the case in public institutions where they prefer Specialist studies “as a recurrence of something that already existed in the former Yugoslavia.”

Counselor in the Employment Agency of Montenegro, Jevrosima Pejovic said that the high rate of youth unemployment to 24 years, which amounts to 34.5 percent of which is worrisome. Furthermore, today we have nearly ten thousand unemployed university graduates on the record of which is compared to 2012 by about 40 percent.

The representative of the Statistical Office of Montenegro, Irena Varagić, said that the institution conducted the survey “The path from school to employment”, which covered three thousand people at the state level, a target population, as he explained, were young people from 15 to 29 years. Results that this study showed were that a number of young people in the population consider a stable job, a job that is indefinite, and on the other hand, we have young people who consider them a stable job if you have a contract for more than a year and that they depend on the stability of the work of the salary.