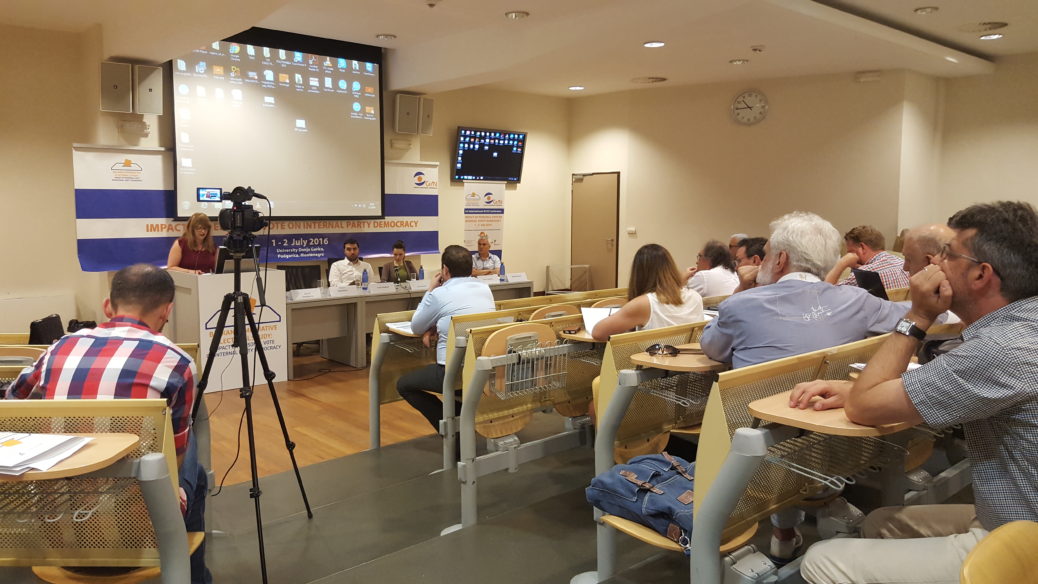 Center for Monitoring and Research CeMI has held the 1st International Scientific Conference “Impact of Personal Vote on Internal Party Democracy”, from 1 – 2nd of July 2016, at the University Donja Gorica in Podgorica, Montenegro.

The purpose of the conference was to raise academic discussion on the topic of internal democracy within political parties and different types of electoral systems with regard to their compatibility with political systems in the Western Balkans. In addition to members of project team, the conference gathered international and regional experts in the field of political science. Through their presentations, participants of the conference provided insight into some of the most important aspects of internal party democracy functioning from both theoretical and empirical perspectives.

The conference was consisted of four panels. The panelists of the first panel “Making Electoral Systems More Personalized” were: Georg Lutz, who examined inner and intra-party competition in open list ballot systems, Michael Marsh, who discussed the single transferable vote and Goran Čular, who presented the role of institutional incentives for personal vote in Croatian elections since 1990. The 1st panel was moderated by Asa von Schoultz.

The topic of the second panel was “Comparative Candidate Survey and Voters Study”. Speakers at this session were Ioannis Andreadis, who presented advantages, challenges and best practices in CCS survey conduct, Asa von Schoultz who analyzed female representation in Finnish Eduskunta, Heiko Giebler who examined sources of MP candidates recognition, Boban Stojanovic who provided empirical findings regarding electoral campaigns in Serbia and Boris Vukicevic, who focused on role of specific forms of organizations within political parties. The panel was moderated by Georg Lutz.

The fourth panel “Changing Electoral and Party Legislation” was held on the second day of the conference. The participants of this panel were: Zoran Stojiljkovic who tackled reform of the electoral system within the maze of political powers, Dusan Spasojevic who examined limitations and dilemmas of electoral system as a determinant of the party system, Vlado Dedovic investigated legal deficiencies and practices in process of termination of MP office and filling empty seats in the Parliament of Montenegro, Jelena Djurisic presented criminal law protection of electoral rights, Sarina Bakic presented her paper published with Nermina Mujagic, on the topic of political parties as generators of social and ethnic conflict in Bosnia and Herzegovina, Damir Kapidzic discussed changes to B&H electoral legislation and Slavisa Orlovic concluded the conference discussing electoral systems’ impact on internal party relations.

In the closing remarks, participants of the conference concluded that internal party democracy is a mandatory element of democracy and one of its principle indicators in democratic societies.

The conference was the final event of the project “Balkan Comparative Electoral Study: Impact of Personal Vote on Internal Party Democracy” which has been implemented within the „Regional Research Promotion Programme“ – RRPP, funded by Swiss Agency for Democracy and Cooperation SDC conducted by the University of Fribourg.