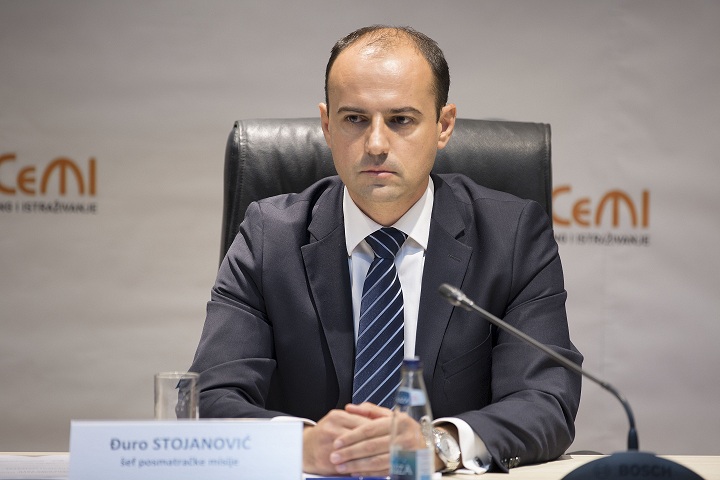 The current electoral process in Montenegro was marked by more intense campaign of political entities and in some segments more aggressive compared to previous election cycles, showed the preliminary report of the Center for Monitoring and Research (CEMI).

Head of the mission, Djuro Stojanovic, said today during the press conference that the increase of activies of political parties in the campaign via social networks was noticeable, which was deprived of higher level of control and regulation that exists in other media.

“This leaves space for the expression of views and opinions that may be contrary to the principles of religious and national tolerance, respect of diversity, democracy and dignity,” said Stojanovic in PR Center.

According to his words, in order for the results of the elections to enjoy integrity and to be accepted by all political entities, it is essential that SEC takes independent, objective and transparent manner in the decision-making process.

“Opinion on the implementation of the Law on Election of Councilors and Representatives in part of identifying voters by using identity cards was adopted by outvoting – which is not a good basis for decision-making during the election process and casts doubt in the integrity of the decisions of the SEC,” said Stojanovic.

He said that MEC Ulcinj is not constituted in accordance with the Law on the Election of Councilors and Representatives, since the president and three members of this MEC are representatives of four parties that are currentlya ruling coalition in Ulcinj Municipality, and only one member is the representative of the opposition.

The Ministry of Internal Affairs informed the public that during the process of preparation of the electoral register a change in the polling station for more than 120,000 voters has occurred. „This data is concerning, bearing  in mind the fact that the Ministry of Internal Affairs has not yet been able to inform all voters about the change in the polling station“.

Stojanovic warned that the final number of polling stations has not yet been defined.

He said that the State Election Commission has not been able to determine the authenticity of signatures of support to the electoral lists, which jeopardized the process of verification of electoral lists.

„We express serious doubts that some political parties, through misuse of personal data of citizens and falsification of signatures, have provided the formal requirements for participation in the Parliamentary elections“, said Stojanovic.

Analyst of the elections, Marko Savic, said that the current state of the electoral process was marked by negative campaign between Democratic Front (DF) and the Democratic Party of Socialists (DPS).

During the electoral campaign, he said, there was a significant violation of the principles of professional ethics and fair behaviour of political entities of particular parties.

Coordinator of long-term observers, Dubravka Popovic reminded that the MIA informed the public about the process of preparing the electoral roll that there has been a change of polling station for over 120,000 voters in Montenegro.

“This is particularly problematic in terms of informing voters of their polling station. Having in mind  the current phase of the electoral process, we can say that there is a fear that a large number of citizens will not be informed about which polling station they should vote in on the Election Day, “said Popovic.

She said that CEMI noted problems with verification of the electoral lists in the municipality of Andrijevica, “where three electoral lists are verified, although they did not meet the legal requirements related to the quota of women representation on electoral lists”.

We remind all interested citizens that our application for short-term observers is active until 5th October, and that more than a thousand citizens applied.

The entire report is available HERE.