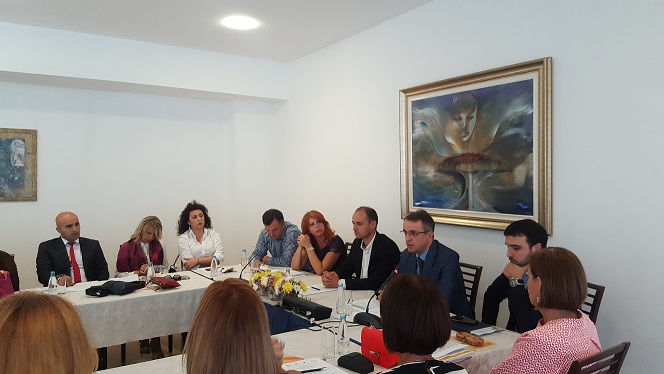 The establishment of cooperation between police and prosecutors is possible to decrease the number of crimes in the course of the electoral process, it was evaluated at a seminar of Center for Monitoring and Research (CEMI).

CEMI organized a two-day seminar “Cooperation of police and prosecutors in the detection and prosecution of criminal offenses in the course of the electoral process” in Budva, during which the representatives of prosecutor’s offices, special prosecutors, as well as police officers, senior police inspectors from the whole Montenegro participated.

Head of Mission, Djuro Stojanovic, welcomed the seminar participants stressing that the aim of this seminar is establishment of cooperation between the police and prosecutors in the detection and prosecution of criminal offenses in the course of the electoral process.

“CEMI more than 15 years of experience in monitoring of the elections and we have observed elections in both Montenegro and foreign countries as part of an international network of observers, ENEMO. What we think that we can do more this time, is to connect the police and prosecution on one hand and connect with good practice in the region on the other hand, but also to provide more information to you who work on this issue daily “, said Stojanovic.

“The experiences we have gained through international missions showed us that this time it would be  a good idea to transfer the experience of our neighbors – lecturers will come from Kosovo. Lecturers will come from this country because Kosovo is faced with incredible decline in confidence in the electoral process and the Kosovo was a stage of large impact of international community and treatment of various abuses, which were very noticeable in this area”, Vujovic explained.

The seminar was opened by the Minister of Internal Affairs Goran Danilovic, who said that the key issue of a fair electoral process is “in a fair legislative.”

“We have a legal framework that prevents those who want to do something to do it in a proper way”,  said Danilovic, stating that the legislative framework remained insufficient.

“The jurisdiction of the Special State Prosecutor’s Office during the electoral process is created, and that itself should let us know where are we now. We could discuss whether in democratic countries the State Procecution has direct jurisdiction when it comes to electoral game, but I believe that we have created it properly, and to us this is an additional safety in the upcoming elections. Misuse of resources and potentially detected crimes this time will not be forgotten. There is a great work ahead of us, but it’s better that way. We’ll need a lot of luck that in October we have decent elections, but we will need to work much more in order to have fair elections ” concluded Danilovic.

A representative of the Supreme State Prosecution, Lidija Mitrovic, reminded that the crimes against the electoral law became the competence of the Special State Prosecution recently, which will, as she announced, monitor the electoral process and react in case of violation of electoral rights and possible misuse with responsibility despite the large number of cases.

“As certain entities in Montenegro estimated that the State Procecution will contribute to the elections to be legitimate, we will on our part with efficient work before, during and after the electoral process do so to realize it. To this end it is necessary that better cooperation between the prosecution and police, non-governmental organizations and other actors and participants in the electoral process, as well as citizens themselves”, said Mitrovic.

The seminar was also attended by State Prosecutor from Kosovo who spoke of the example of good practice in the area of institutional cooperation during the elections in that country.

Teachers in Kosovo have said that the cause of the establishment of cooperation between the institutions during the Elections was a decrease in trust in the electoral process of the citizens of Kosovo.

“The idea came from the Chief State Prosecution and the police, with the aim of preventive effect on reducing manipulation in the voting process, and which have been evident in previous election cycles,” said Shabani.

He said that cooperation between five institutions formalized through a Memorandum of Understanding that was signed for the local elections in 2013 and Parliamentary elections in 2014, and the document was signed by the State Prosecution, Police of the Republic of Kosovo, Judicial Council, the Central Election Commission and the Electoral Panel for complaints and petitions.

“The main goal of such cooperation was proactive joint action of mentioned institutions that was established in the Constitution and the Law on State Prosecutors, which provides them  the possibility to initiate preventive measures to combat criminal acts during the election process,” explained Shabani.

Realization of cooperation through the signing of the memorandum, as he pointed out, caused the primacy for solving the cases should be given to cases of violations of the law during the election process within these institutions.

“The results of such preventive action are strengthened connection of institutions, joint work in solving cases, and the most important influence on the consciousness of citizens that electoral manipulations are punishable, but also that citizens should objectively be informed about all aspects of the electoral process, the irregularities, initiated cases during the entire electoral process”, said Shabani.

Compared to the previous electoral processes, as he pointed out, after the establishment of such cooperation number of crimes in the course of the electoral process has drastically decreased.

This seminar was realized within the project “Civil Monitoring of the Elections in Montenegro 2016 – Let fair elections become a habit”, which is funded by the British Embassy and the  Embassy of Republic of Germany in Podgorica and the Embassy of the Kingdom of the Netherlands in Belgrade.