INSTEAD OF POROBIC, THE SEAT SHOULD HAVE BEEN GIVEN TO LALICIC 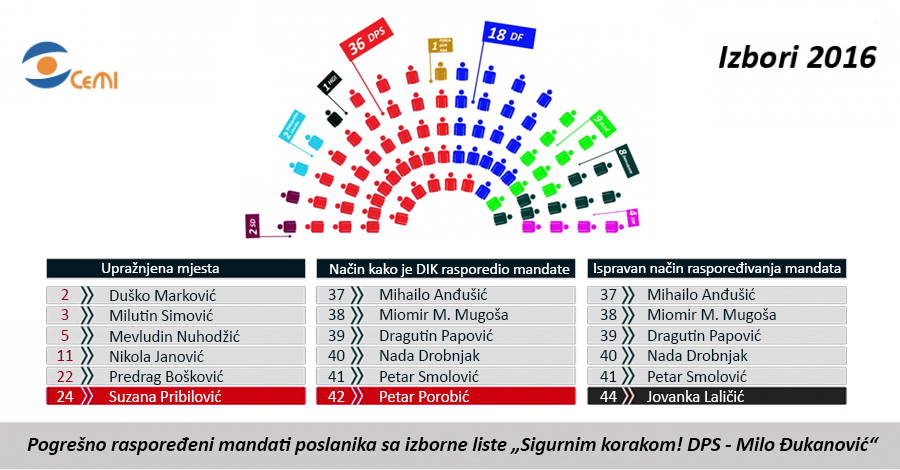 The Center for Monitoring and Research (CEMI) sent a request to the State Election Commission (SEC) to remove harmful consequences made in misallocation of seats that was, instead of Jovanka Lalicic – the first representative on the list of less-presented sex, given to Petar Porobic.

CEMI has, in its request submitted to the president of the SEC Budimir Šaranović, warned that the Commission incorrectly implemented Article 104 of the Law on Election of Councilors and Representatives, and determined that the seat should be distributed to the person who does not have this legal right in this occasion.

CeMI explained that the SEC wanted to distribute seats „to candidates in order of the electioral list – in particular to Mihailo Andjusic, Miomir M. Mugosa, Dragutin Papovic, Nada Drobnjak, Petar Smolovic and Petar Porobic“ based on the Act number 1060/8 from 30th November 2016.

“The Law on Election of Councilors and Representatives, Article 104, paragraph 2 provides that “if  on the electoral list from which the councilor or representative was elected remains the same or a higher number of candidates than the number of councilors or representatives whose term of office expired, the candidate who is next in the order on the list will be elected”“, is stated in a request signed by the President of the Governing Board of CeMI, Zlatko Vujovic.

„Therefore, the sixth (24th on the party list) vacancy  that occurred by appointing Suzana Pribilović as a member of the Government of Montenegro, was filled incorrectly. Instead of Peter Porobića (42nd on the list), who is next on the list, you should have, in accordance with Art. 104, paragraph 4, distributed the seat to the first on the list of members of the under-represented sex. Underrepresented gender in the electoral list of ” Sigurnim korakom! DPS – Milo Djukanovic ” is female”, explained Vujovic.

Instead of Suzana Pribilović, as specified, the seat should have been rewarded to Jovanka Laličić (44th on the list), the first next woman on the electoral list.

CeMI appealed that the SEC should immediately initiate procedures in order to correct the damage that occurred and to remove harmful acts caused by the wrong implementation of the Law on Election of Councilors and Representatives.

“The SEC has no right to change the electoral will of the citizens, that is to decide who will be the holder of the representative seat. If your Act is not modified, or the same procedure is not performed in accordance with the Law, CEMI will take the actions so that are bad consequences are urgently removed by other means, ” it said in this organization.

In the table below, you can find tabulation and comparison of the SEC’s and the correct allocation of seats.