To reduce the number of first instance courts 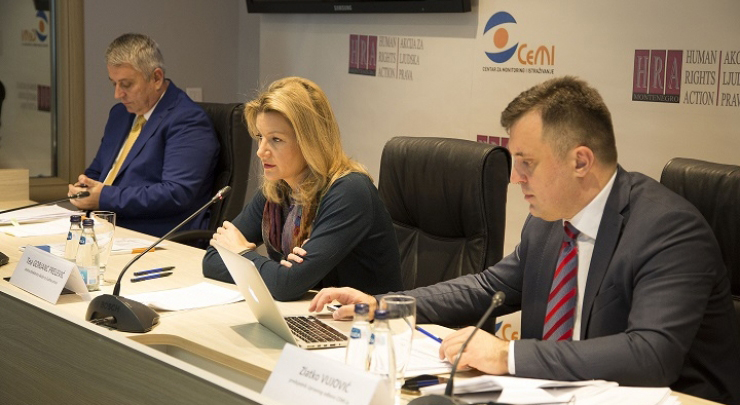 There are twice more courts and judges in Montenegro compared to the European average, which is why the second phase of the rationalization of the judicial network should be focused on reducing the number of first instance courts, it was announced at the presentation of the Report of the Center for Monitoring and Research – CeMI.

A report on the rationalization of the court network in Montenegro was created under the project “Judicial Monitoring Reform”, implemented by CeMI and Human Rights Action (HRA), with financial support of the European Union and the Kingdom of the Netherlands.

Zlatko Vujovic, President of the Governing Board of CeMI said that according to the Report of the European Commission for the Efficiency of Justice (CEPEJ) Montenegro allocates 42 euros per capita for the functioning of the judicial system, which is, as he explained, below the European average of 60 euros.

“According to the CEPEJ’s Report, 76% of total assets has been set aside for the work of the courts in Montenegro out of the total judiciary budget. What makes us poor, compared to other countries, is setting aside means for computerization, improvement and use of IT technology, ” said Vujovic.

Montenegro, as he said, belongs to the group for which is said that has a dense network, where 100 thousand residents enjoy services of two to five courts, and the average is 1.4 %.

“If we consider these data, we see that we have twice more judges than the average, two to three times more courts than what the average is, and a very large number of pending cases”, Vujovic pointed out.

He said that the first phase of rationalization of the court network gave positive effects when it comes to the unburdening of the basic courts from probate cases and their delegation to the jurisdiction of notaries.

Based on the number of probate cases before the courts prior to and after enacting the legislative reforms, it can be concluded that the basic courts are unburdened from work on probate cases and that the proceedings of the inheritance before notaries are fast and efficient, by which it has been achieved the objective sought to be accomplished through this novelties” Vujovic said.

Establishing a system of bailiffs and updating jurisdiction of courts in handling enforcement cases, as he assessed, contributed to the decrease in the inflow of execution in basic courts to some extent.

“A particular problem is the insufficient level of accountability in the system of public enforcement, which has been recognized through insufficient respect of professional and ethical standards in their work,” Vujovic warned.

According to him, as in April 2017 it will be three years since the beginning of bailiffs’ work, it is necessary to do a new analysis on the so far effects of their work, as well as on the impact of their work on unburdening of the courts’ work in enforcement proceedings.

It is necessary to increase the allocations from the state budget for computerization and improvement of use of IT technology in the justice system. Rationalization of the court network must be accompanied by the improvement of the opportunities provided by PRIS and it is needed to continuously work on improvement of this system “said Vujovic.

Stanka Vucinic, Deputy President of the Supreme Court of Montenegro, considers that the number of cases that judges have to work on in Montenegro is neglected while drafting the report.

“These days we have been in the Basic Court in Podgorica, where I heard the shocking information – colleagues in the litigation department have about 900 cases annually per judge. This is something to be considered when making this analysis” Vucinic said.

She said that the question “why are citizens so much engaged in trials ” is raised, given the fact that, as she stated, number of cases in the Basic Court increased by ten percent compared to the previous year.

“Why are our citizens so much into trials? Is there anything that can be changed without court employment, and independently from the court, but to keep less number of cases in the courts” said Vucinic.

Tea Gorjanc Prelevic, Executive Director of HRA, reminded that in July 2015 this organization organized a national conference on the reform of the judiciary where it presented a report on the implementation of the Judicial Reform Strategy for the period 2007-2012, made by the HRA and CeMI.

“We consider that it was necessary for the state to do such report before it introduced a new strategy for 2014/2018 , as it often happens that the state continues to adopt new strategies without thorough analysis of what has been achieved previously or what has not been achieved, “said Gorjanc Prelevic.

She noted that the report indicated that the new Judicial Reform Strategy 2014/2018 contains four strategic objectives, as the previous one, and identical, large number of strategic guidelines.

“This indicates that substantial reform objectives have not been achieved, so it has been necessary to plan their implementation in four years to come,” explained Gorjanc Prelevic.

“That’s why we consider that the expert public remained without possibility to contribute to the analysis and propose solutions for rationalization”, said Gorjanc Prelevic.

Zoran Radovic, President of the Basic Court in Podgorica assessed that the report prepared by CeMI is impartial.

“The rationalization of the court network mustn’t be the purpose itself. It should be guided by the objective to increase the efficiency of the functioning of the judicial system and it should not undermine the principle of the right to justice access, in any case”, said Radovic.