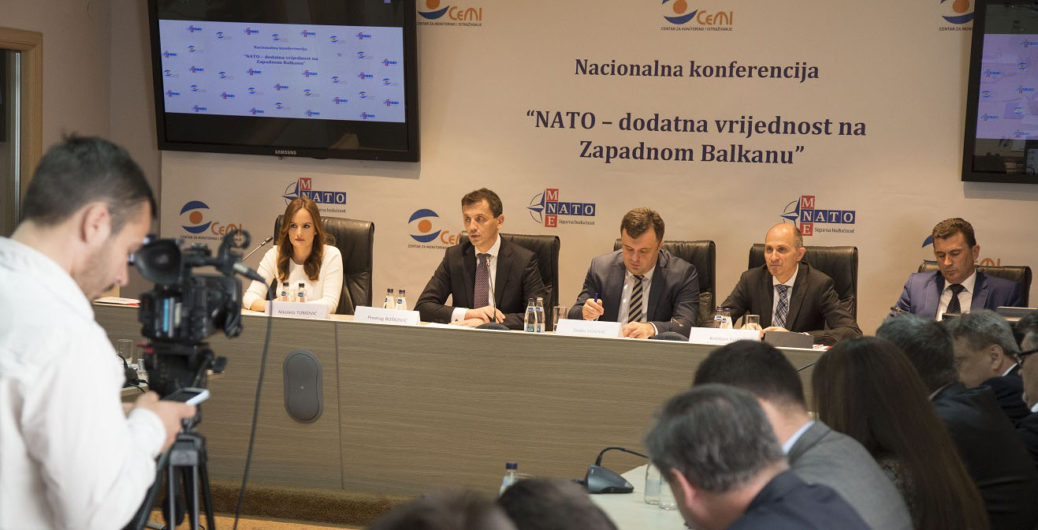 Minister of defense, Mr. Predrag Boskovic, said that Montenegro as future full-fledged member state of North-Atlantic Treaty Organization will advocate for other countries of Western Balkans to become a part of collective security.

During the national conference “NATO – Added Value for Western Balkans” which was organized by Center for Monitoring and Research (CeMI) in cooperation with Communication team of Council for NATO membership, Mr. Boskovic said that in case of Western Balkans, Euro-Atlantic expansion of the NATO should not be terminated with Montenegro succession.

“Montenegro, as the future full-fledged member state of the NATO will advocate for other Western Balkans countries to be a part of that collective security system”, Boskovic said in PR Centre.

He believes that the best confirmation of such act is the ratification of the Protocol of Accession of Montenegro, claiming that he is positive Montenegro will soon become full-fledged part of the North-Atlantic community.

Ambassador of Hungary to Montenegro, Kristijan Posa, believes that the positive example of Montenegro may be an incentive for other countries in the region that would like to take the same path.

“Montenegro will play a stabilizing role in the region as a part of the NATO. Montenegro, as factor of stability and a positive example in the region, will empower other countries to choose the same path that Montenegro chose for its future”, Posa noted.

He emphasized that Montenegro will become a part of the world where citizens would be given opportunities they haven’t had so far.

National coordinator for NATO, Dragan Pejanovic, said that membership in the NATO provides additional values in the region which mostly refers to euro-Atlantic realm of peace, stability and security, “which is the condition for further development”.

“The importance of this historic and civilizational step for Montenegro will contribute to strengthening of enthusiasm for further promotion of our security, but also legal and political system that NATO membership assumes and demands”, Pejanovic noted.

Euro-Atlantic values are being affirmed and promoted, as he said.

“By affirming and promoting Euro-Atlantic values, we send clear message of willingness of Montenegro to promote and strengthen regional and international cooperation, peaceful settlement of disputes, respect of human rights and freedoms, democratic development and readiness to defend our integrity and value with the help of those with whom we share these values”, Pejanovic pointed out.

President of Governing Board of CeMI, Zlatko Vujovic, noted that Montenegro needs to focus on internal issues, as he specified on fulfilling criteria referring to the EU membership.

“Montenegro is heading in right direction when it comes to the defense system; therefore I hope that this process will be completed soon, during the next couple of months. I believe that will contribute to the political tensions to be lowered in Montenegro, as we should turn to issues that will be dominant until Montenegro becomes member of the EU”, Vujovic emphasized.

Professor at the Faculty of Law at Mediterranean University, Branislav Radulovic, believes that the way of becoming a member of NATO is the issue of politics, and not the issue of law.

“Academic community must provide exact data and contents that must be available to citizens of Montenegro”, Radulovic said.

Professor at the Faculty of Political Science at University in Zagreb, Radovan Vukadinovic, said that benefits, that Croatia gained through NATO, may be divided in several levels, and of them is political.

“By becoming a member of NATO, Croatia entered the most powerful organization in the history of world. It was given the opportunity to decide on different issues of security and peace along with other countries. That is something that opened a path for Croatia to become a member of the EU”, Vukadinovic noted.

According to his words, benefits were tied to the organizational issues, especially when it comes to army. “Our army is probably, in this moment, one of the best organized institutions”.

Jasminka Simic from Radio-Television of Serbia said that the interest towards the Euro-Atlantic integration in Serbia decreased, under the influence of internal and external factors.

“Internal factors include remembrance of NATO bombarding and consequences, as well as human and material casualties that this event had caused. Also, the interest decreased due to the declared independence of Kosovo, since majority of Serbian citizens thought the NATO supports the process that is happening in Kosovo”, Simic noted.

She said that external factors include world economy crisis, especially the crisis in euro-zone that lowered trust in the future of the EU and in general. “There are economic and energetic connections between Serbia and Russia, and it is known that Russia is against the expansion of NATO”.

“All that, since 2001 led to decrease in interest for the membership of Serbia in the NATO. Therefore, the support of Serbian public for the NATO membership never went over 14%, and the newest researches show that the support is between 7 and 10%”, Simic noted.