Most candidates for deputies supported the law on registered partnership 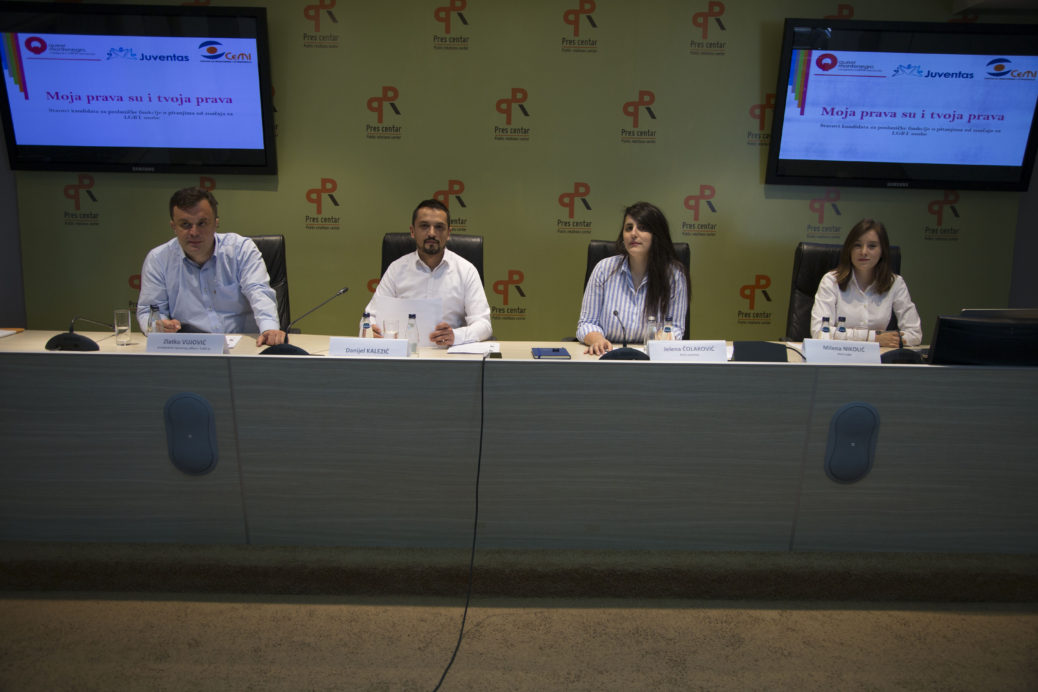 Nearly two-thirds of the Montenegrin MPs would vote for a law that allows LGBT people registering same-sex partnership with the scope of rights similar to those arising from the marriage, it was announced today at a press conference LGBTIQ Association of Queer Montenegro.

At a press conference was presented “Survey on the attitudes of candidates for deputies of the Assembly on issues of importance to LGBT people,” conducted by the Centre for Monitoring and Research (CeMI) for the project “My rights are your rights”, which conducted Queer Montenegro and Juventas.

Chairman of the Board of Queer Montenegro, Danijel Kalezić is presenting the research that has been conducted since October last year to May this year, he said that the Montenegrin candidates for deputies, unlike citizens, showed significantly high level of understanding for the needs of LGBT people.

“In a sample of 29 respondents who are members of parliament, 65 percent of them would vote for a law that allows LGBT people registering same-sex partnerships with some scope of rights, similar to those arising from marriage”, while more than a half of 106 respondents said thay would vote for this right, said Kalezić in PR Center.

According to him, 83 percent of MPs would vote for the realization of the rights of LGBT people to marry and, as he said, 21 percent of them would vote so, only if party specifically asked of them to do that.

Kalezić said that dramatic changes in the attitudes of candidates for deputies are noticed when it comes to child adoption by LGBT people.

“Only 20 percent of respondents support the possibility that LGBT people, on the basis of living together with their partners, adopt children, while half of them oppose this idea,” explained Kalezić.

He added that 68 percent of delegates supported the Pride Parade, while 24 percent was against it.

“17.9 percent of candidates are ready to take part in the Pride Parade, while more than half of respondents are not ready to take that step,” said Kalezić.

“Wrong answer to the question whether homosexuality is a disease gave 18 percent of respondents, while one third of respondents have no opinion or did not know,” said Čolaković.

She said that nearly 40 percent of respondents did not know whether the transgender is a disease.

“Issues related to trans people point to the lack of information and the need for direct contact with decision-makers, so that problems with which the transgender community faces could be resolved.

According to her, if they found out that their child belongs to the LGBT community, 31 percent of respondents would try to “help” children, seeking medical services.

“The data is concerning, because it speaks of the high level of ignorance. It is important to emphasize that we are not talking about the disease and that homosexuality is not treated,” Čolaković explained.

Psychologist at CeMI, Milena Nikolic, said that more than half of respondents believe that LGBT people should have the right to freely and publicly hug, hold hands and kiss.

“55.7 percent of candidates for deputies considered that LGBT people have the right to freely and publicly express their sexuality. Among the respondents, 27.4 percent said they would feel uncomfortable to see two women publicly declaring their homosexuality, while one-third of respondents have the same opinion if they saw two men to publicly expressing their sexuality,” Nikolić explains.

She said that nearly 70 percent of respondents have heard that someone was abused in any way because he or she is a LGBT person, and that, she said, 5.7 percent witnessed such violence.

Chairman of the Governing Board of CeMI, Zlatko Vujovic, said that it is important to distinguish the difference between the candidates for deputies and deputies.

“The study included 106 respondents who were candidates for deputies of the Assembly in the Elections of 2016, out of which 29 are currently performing this function,” said Vujovic.

He added that it is commendable that all electoral lists, which provide parliamentary status, except the Democrats, participated in the survey.

“Democrats have not allowed their MPs to participate in this study, but a comparative study is still ongoing and I hope that colleagues from the Democrats still decide to participate,” Vujovic said.

Presentation which was presented is available HERE.