Further improve the living conditions of vulnerable groups in prison 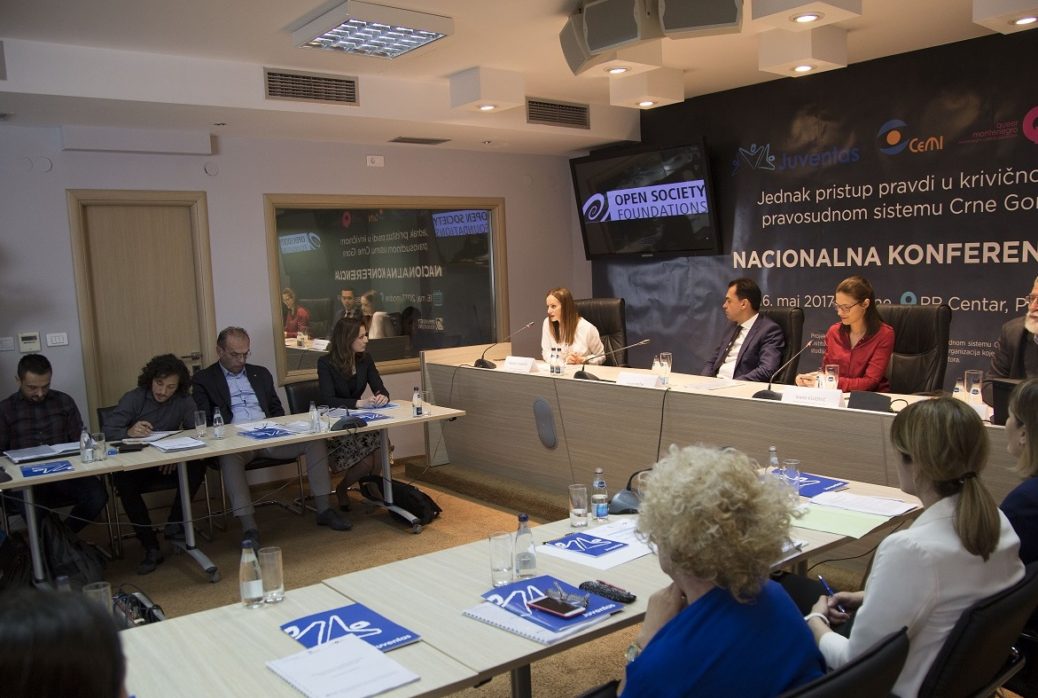 In Montenegro the rights and living conditions of detainees and people serving prison sentences are significantly improved, but were not sufficiently provided the opportunity to state further improvement, announced executive director of non-governmental organizations (NGOs) Juventas Ivana Vujovic at a National news conference “Equal access to justice and judicial system in Montenegro”.

The conference was organized by the NGO Juventas, Centre for Monitoring and Research (CeMI) and LGBTQ Association of Queer Montenegro within the same project, which is financially supported by the Open Society Institute in Budapest.

Vujovic said that the project followed by judicial authorities against persons who use drugs, people with mental functioning, and people living with HIV / AIDS during the investigation and trial penal detention.

A separate survey was conducted in relation to the situation of LGBT people in prisons. , Vujovic noted.

“With regard to the situation of people with disabilities in mental functioning, institutions lack trained personnel and often physical capacities. Thus, in a situation that requires a measure of treatment depending conducted at the Institute for Execution of Criminal Sanctions, which has no special hospital, there is not enough staff in the service of treatment and medical care, a Special Psychiatric Hospital in Dobrota there are not enough beds intended for patients that the court is suggesting “, explained Vujovic in PR Center.

According to the NGO Juventas, from September to December of last year, they organized 17 inspection visits to the Institute for Execution of Criminal Sanctions (LECS), and CeMI analyzed 80 trials.

“Taking into account that during the last year ZIKS visited 46 percent of returnees, and that the degree of recidivism was high among the population of people who use drugs, of particular importance for this population, but also society as a whole is a significant improvement of treatment programs for addictions in prison conditions, as well as the freedom for people who are in conflict with the law “, said Vujovic.

She stressed that the situation of women who use drugs, which are in conflict with the law is very worrying, and that people with disabilities of psychic functioning do not receive adequate support when they are released.

“Despite significant improvements, we must point out that the health care of people living with HIV and those who have Hepatitis C in prison is not equal to people who are free”, said Vujovic.

Minister of Justice, Zoran Pazin, said that the company has to have a special sensitivity to socially vulnerable groups, because, as he explained, the extent to which their rights are protected by the measures of humanity of a society.

“The right of access to court as an integral element of the right to a fair and public trial and the principle of non-discrimination are two themes or two international legal standards of capital importance for the overall prosperity of Montenegrin society,” said Pazin.

The principle of non-discrimination in international legal framework, as he recalled, edited by Article 14 of the European Convention for the Protection of Human Rights and Fundamental freedoms, but “a way that is somewhat limited.”

“Article 14 includes the prohibition of discrimination in the realization of only those rights that are protected by the European Convention, but we know perfectly that the Convention regulated mainly civil and political rights, while economic, social, and cultural rights regulated by other international legal instruments,” explained Pazin.

Counselor at the Supreme Court of Montenegro Bojana Bandović, believes it is necessary to solve the lack of physical capacity and that the state security court is on a very low level.

“Only the High Courts in Podgorica and Bijelo Polje are equipped with separate waiting rooms in which witnesses were waiting for trial, and when it comes to basic courts, these problems go beyond using other facilities and thus respect international standards that require the courts to take into account that in any situation when you need to avoid meeting the defendant and the victim, “ explained Bandović.

President of the Basic Court in Podgorica, Zoran Radovic said that reality is “lagging behind” the legal definitions, but that progress has been made in the part referring to the release of the courts.

“In our opinion there are screens where the trial can be seen every day, citizens can see what trials are that day on the website and can attend these trials, “said Radovic.

Dean of the Faculty of Law at the University of Donja Gorica (UDG), Zoran Stojanovic, believes that criminal law in a relatively short period of time came a long way, especially, he said, in some areas.

“Now, in the Criminal Code of Montenegro we have a provision that if the offense is committed against a person because of his sexual orientation, this is a mandatory aggravating circumstance,” explained Stojanovic.

He said that the public has the wrong impression that the people with mental incapacities are frequent offenders, because statistically, as he explained, it is negligible.

“Much more common are those people with certain mental disorders, which are far from being able to declare them to insanity. Our criminal law is such that it is asking a lot for someone to be declared mentally incompetent, “said Stojanovic.

General director of Directorate for Justice at the Ministry of Justice, Marijana Laković Drašković said that people deprived of their liberty because of mental illness or other psychiatric problems must receive equal treatment and deprivation of liberty, as specified, it must not be arbitrary but must be based on specific legal basis.

“The deprivation of liberty of these people shall be for the purpose of health and social control with the use of objective medical standards in determinating whether a person is considered mentally ill appreciating nature of this situation, which must be sufficiently serious to justify the deprivation of liberty,” said Lakovic Draskovic.

Author of the study, Jelena Đurišić, said that it is important to harmonize the legal and psychiatric terminology, as well as resolve the issue of the limited capacity of the Special Psychiatric Institution Dobrota in Kotor.

“Given the overloaded court and departments for the treatment of substance abuse, as well as long-standing unsolved problems related to the operation of these hospitals, especially given the fact that the Special Psychiatric Hospital in Kotor since its establishment is not intended as a prison hospital, there is an obvious need for construction prison hospital, which is in accordance with numerous comparative law practices and recommendations “, said Djurisic.