Association of court experts to grow into the Chamber 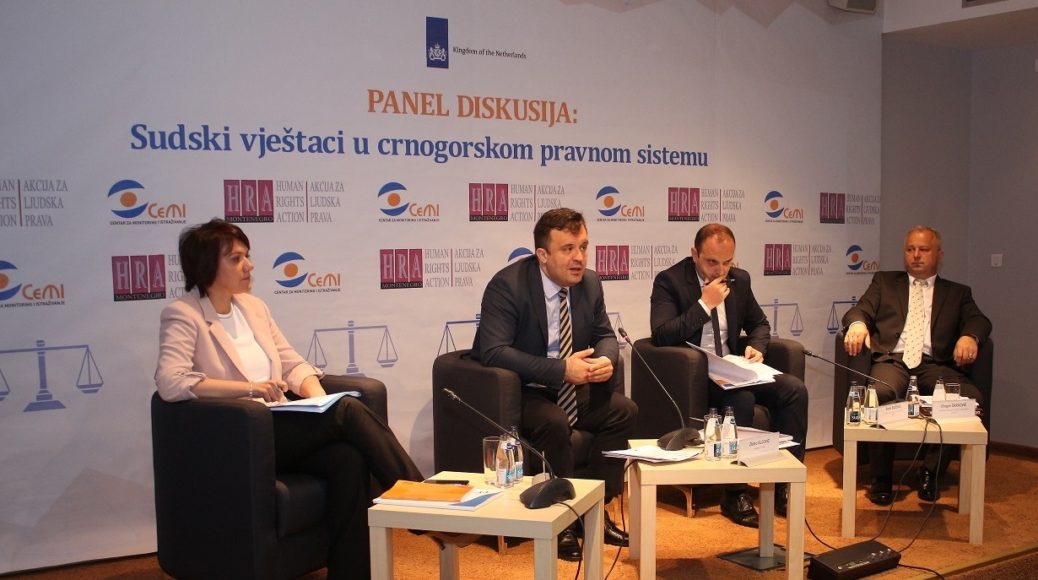 In Montenegro, it is necessary for the Association of court experts to grow into the Chamber, and for them to be better rewarded for their work, and to be equally represented in the proceedings before the Court, it was assessed on the panel of the Centre for Monitoring and Research (CeMI).

Panel discussion “Expert witnesses in the Montenegrin legal system” was organized within the project “Towards a judicial efficiency – improving the development of the profession in relation Montenegrin judiciary”, implemented by CeMI and Human Rights Action (HRA) with financial support from the Royal Netherlands Embassy.

“The bailiffs, notaries and lawyers have their Chambers, but over 1,300 court experts, how many there are in Montenegro do not have that status still. Although the recent activities of the new management failed to raise the number of members, even today, the Association in its composition does not exceed 20 per cent of the total number of court experts, “said Žarković in PR Center.

Žarković considers the controversial fact that in the choice of court experts judges have their own approach and do not give the advantage to the members of the Association.

“On the contrary. According to unofficial statistics, more cases have expert witnesses who are not from those who are members of the Association. It is certainly worrying, because it gives the impression that sympathy or habits of judges are crucial, “said Žarković.

According to him, less than a third of court experts have more than two cases per year.

“The current situation presents a major problem for expert witnesses who are at young stagein their profession. They have a hard time getting cases. No one knows them, and nearly one-third of them for three years do not receive any cases. “said Žarković.

Many expert witnesses, as noted, are not doing their job, and this is, among other things, the wrong way of their appointment, which is “easy”.

Author analysis “Expert witnesses in the Montenegrin justice system,” Bojan Bozovic, said that the adoption of the Law on expert witnesses is in order to achieve prosperity normative structure, but there is a problem of unequal representation of court experts in court proceedings.

“We hope that this will change, because why should the role of expert witnesses in court proceedings be different than for example the role of lawyers elected ex officio, “said Bozovic.

He pointed to the gap that exists between the compensation for the work of the expert and the amount of professional examinations.

“I really think that the fee should be increased in accordance with the standards that exist in Montenegro, especially because of the high cost of the exam. The competitive price is not laying low, on average about 500 euros, “explained Bozovic.

According to him, the problem is that the Association of court experts does not function as a government body, but as a non-governmental organization (NGO), and the Law on Court Experts intended major role for them that is difficult to implement.

“It is unlikely that an NGO assume such a great responsibility to them, and that at least officially does not have any help from the state,” said Bozovic.

“I think that according to official statistics, only 13, 14 percent of court experts in Montenegro are a part of the Association of court experts, which should certainly change in the coming period,” explained Bozovic.

In the future, as he said, it is necessary to influence the consciousness of those who takes part in the court proceedings, to gain confidence in the experts.

“Expert witnesses are and should be a very important part of the legal process. With their participation the judicial process itself will be faster, more efficient and more economical, “said Bozovic.

He said that it is necessary to make a plan and program of continuing education and professional development of court experts.

“It is not a rational and fair to transfer full responsibility to the Association of court experts, but that responsibility is to be divided and transferred to other institutions,” said Bozovic.

Legal expert for the economic area, Marija Djukic, said that the price of labor court experts and the value of one point of five and a half euros is very low.

“Comparing with the reward system in the region we come to the conclusion that the level of prizes in Montenegro is the lowest,” explained Djukic.

Training of court experts must be continuous and compulsory, as he belives.

“Expert witnesses must attend seminars and workshops, in order to achieve certain points, which will later be used for the extension of the license,” said Djukic.

According to her, it is necessary to constantly work on the evaluation of court experts by interviewing judges, presidents of courts, other agencies and the public.

Expert from Bar, Nebojsa Strugar said that the Law on expert witnesses has many flaws and does not define in which period the judge shall issue a decision on compensation.

“Some judges behave like “I shall make a decision when I wand, one fine day.” One judge only owes me 9,000 euros, “said Strugar.

Judge of the High Court in Bijelo Polje, Šefkija Đešević, believes that value of awards for experts must be increased.

“Some expert witnesses travel from Podgorica to Bijelo Polje, they lose a whole day, for 27 euros. In the criminal procedure is very strict, so many points, “said Lješević.

Expert psychiatrist, Stanko Milic said that the quality of expertise depends on whether there are respected standards of the profession and stressed that the judges expertise and entrust the task even to those who cannot meet.

“For example, in severe criminal offense, finding is given on less than two pages. If this continues at the same court, then the judge must be critical, to see that such practices cannot go on, “explained Milic.

Zoran Stanisic said that he didn’t have any cases so far, although he has been an expert for three years.