The selection procedure for defense attorneys to be more transparent 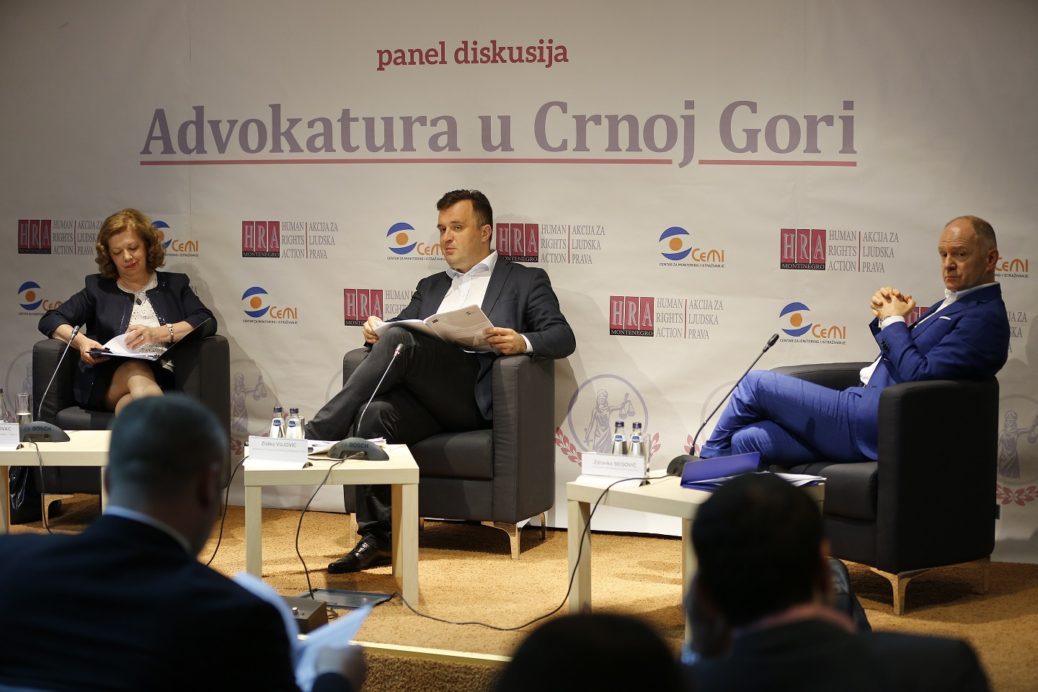 Lists defense attorneys for representing the ex officio should be published and regularly updated on the website of the Bar Association of Montenegro (AKCG), because some lawyers believe that there is abuse when it comes to the way of contacting.

It is rated in the second session of the panel discussion “Advocacy in Montenegro – Defense of duty”, which was organized within the project “Towards effective justice system – improving the development of the profession in the function of the Montenegrin judiciary”, conducted by the Centre for Monitoring and Research (CeMI) and Human rights Action (HRA), with financial support from the Royal Netherlands Embassy.

Chairman of the Board at CeMI and editor of the report “Defense of duty – a domino effect of circumventing the legal procedures,” Zlatko Vujovic, said that the list of counsel to represent the line of duty should be made publicly available on the website of AKCG and should make a separate list of only a finder’s fee lawyers who want to deal with the official defense.

“There are those lawyers who do not want to deal with the official defense, but only civil law. In this way it would prevent the situation that some lawyers refuse to represent, “explained Vujovic in PR Center.

Research among lawyers showed that some lawyers believe that there is abuse when it comes to the way of contacting.

“They said that if they didn’t answer the call because they were in the courtroom, therefore they dropped their order on the list, because the deadline for reporting was unrealistic, “explained Vujovic.

In order to build the professional capacity, as stated, AKCG should introduce compulsory training programs, special seminars or other forms of education.

Vujovic said that 40 criminal judges, who submitted answers to the questions, one third of them during the trial noticed passivity in defense by counsel who was officially appointed, and more than half of the judges believe that some lawyers were not expert in cases in which they are engaged ex officio.

According to him, the decision on setting up a defense lawyers ex officio should be made public on the website of the courts and public prosecution offices, including details on the amounts of compensation paid to them.

Manageress of the Basic State Prosecution’s Office in Podgorica, Ljiljana Klikovac reminded that from August 15th 2015, the rule is that lawyers ex officio are determined in the order from a list submitted by AKCG and pointed out that the prosecution did not violate this rule once.

“We are not obliged to have official records, but we have internal records of lawyers who declined to be appointed by the counsel, who did not answer, who accepted the defense and which case is in question. At any moment, I know what the situation is in reference to contacting lawyers, “Klikovac explained.

She noted that she, from 2015 until now, addressed dozen lawyers with a variety of comments and complaints related to the deployment of defense ex officio.

“A dozen lawyers wrote to us asking why the Prosecution did not put them there, and their remarks referred to the period prior to August 2015. Every one of them I informed in writing about the fact that defendant makes selections, “explained Klikovac.

One lawyer, as she said, complained that he was called only ones and from a protected number.

“Us and AKCG should agree on the number of calls to lawyers but also take in consideration that the prosecutor does not have the time to repeatedly call a lawyer. We should tolerate five minutes for a lawyer to accept, but more that that is very difficult, “said Klikovac.

President of AKCG, Zdravko Begovic said that they extremely care about respecting the process of selecting a court-appointed lawyer, but it is not possible to prohibit the selection of the defender.

“In the last few years, never more care was taken to comply with the procedures and lists of lawyers from AKCG. However, there is always a moment when someone will be selected without the list of counsel, “Begovic explained.

He pointed out that the Chamber calls the prosecution and courts regularly to control lists, and that, as he said, has so far received only three letters from lawyers that have not been set for defense counsel ex officio in recent years.