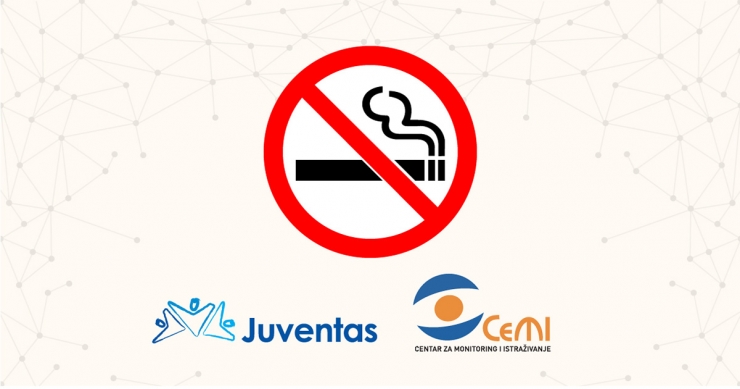 The Ministry of Health supported the initiative to ban smoking in public places, sent by the NGOs Juventas and the Center for Monitoring and Research (CeMI), stressing that the provisions of the legislation regulating this area must be applied consistently.

NGOs Juventas and CeMI earlier submitted an Initiative to the Government, asking them to introduce a ban on smoking in public spaces, which would, as they consider, enable the full implementation of the current Law on Restriction of Tobacco Products Use.

The Ministry of Health, as announced by the two organizations, discussed their initiative, pointing out that it is unambiguous that the provisions of the Law on Restriction of the Use of Tobacco Products in relation to the ban on smoking in public places “must be applied consistently”.

“Namely, the preparation of a new law regulating this area in order to further harmonize with the regulations of the European Union and the Ministry of Health will be in the firm position for such a legal solution, ” said in a response signed by Health Minister Kenan Hrapovic.

The initiative assesses that it is necessary for the Government to initiate the procedure for amending the Law on taxes on the use of tobacco products and electro-acoustic and acoustic devices in catering facilities.

Executive Director of Juventas, Ivana Vujovic, assessed that this would enable full application of the Law on Restriction of Tobacco Products Use.

“We believe that the Law on taxes on the use of tobacco products and electro-acoustic and acoustic devices in catering facilities should not have been voted in this form, as pointed out by the World Health Organization (WHO)”, emphasized Vujovic.

According to Juventas and CeMI, they believe that the new Law on Restriction of Tobacco Use will be an opportunity to introduce additional provisions aimed at reducing the exposure of children and adults to the harmful effects of the smoke, “which is one of the causes of the worrying increase of malignant and cardiovascular diseases in Montenegro “.

“After the Ministry of Health, we believe that the initiative will be supported by the Prime Minister, and that the Government will decisively and unequivocally commit itself to the improvement of health, that is, to initiate the abolition of the controversial provision of the Law on taxes on the use of tobacco products and acoustic devices in the shortest time possible.” said Vujovic.

Juventas and CeMI, she added, are grateful to the Ministry of Health for the response, and insisting on the implementation of the principles of the World Health Organization Framework Convention on Tobacco Control, that is, measures that are proven to lead to a healthier society.