In the area of public services, consumers’ rights are not sufficiently respected 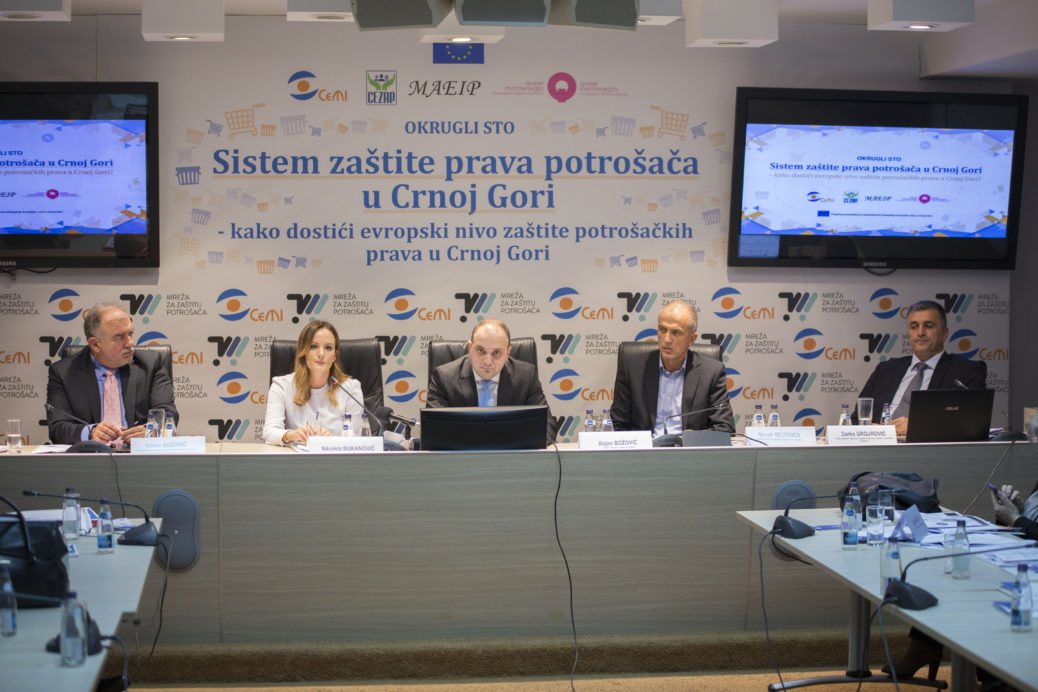 The rights of  Montenegrin consumers in the field of public services are not sufficiently respected, and the reason for this, apart from the information problem, is the lack of cooperation between the providers of public services, it was assessed during the second part of the round table of the Centre for monitoring and  research (CeMI).

“The reason for this, apart from the information problem, is the lack of cooperation between the providers of public services, especially with consumer organizations, regulators, inadequately application of the law by public service providers, lack of transparency of courts”, said Đukanović at PR center.

She said that it was important to intensify the cooperation between the mentioned actors and, as she said, work more on the application, monitoring, amendments and supplements to the existing laws and by-laws, “in order to provide a legislative framework for adequate protection”.

According to her, when it comes to energy, from the point of view of consumer rights, laws in this area are directly opposed.

“Thus, when it comes to the procedure for halting electricity, the provisions of the Energy Law are contrary to the Law on Consumer Rights Protection. Both laws are in conflict with the Constitution because it stipulates that citizens should not be denied basic human rights that include rights on water and electricity”, said Đukanović.

Such an attitude, she explained, did not result from the desire to cause any damage to the suppliers, “but it is wanted to point out that in our legal order there are mechanisms for sanctioning the unauthorized electricity consumers, not to mention the institute of enforcement”.

“But the measures currently being implemented are inadequate, and they are contrary to democratic standards and are unworthy of human beings”, concluded Đukanović.

Executive Director of the agency for Electronic communications and Postal Services, Darko Grgurović, explained that, if the user is dissatisfied with the access to the account for the provided services, the quality of the services, he can make an objection to the operator.

He thinks that the causes are different, because, as he pointed out, the disagreement of expectations between consumers and service providers, the need for consumers, and the neediness of the operator.

“Number of annually received appeals to the Agency is 380, with an average of  35 on a monthly basis. Is it a lot? My colleagues working on protection will say, because they hardly come to handle them. I think that it is not when compared to the level that in Montenegro we have 1.1 million SIM cards, 100 thousand fixed connections, 140 thousand broadband  internet connections, 200 thousand TV channels distribution programs”, said Grgurović.

The executive director of the Energy Regulatory Agency, Novak Medenica, said that smart meters were introduced in 70 percent of consumers.

“The planned coverage of 75 percent is planned by 2018. These concept already shows advantages over precision and accuracy of measurement, one of the basic prerequisites for the development of smart networks that will allow interaction, active communication between customers and consumers of electricity”, said Medenica.

President of the Arbitral Tribunal at the Chamber of Commerce of Montenegro, Vesko Božović, believes that the out-of-court settlement of disputes is a “dead spot on paper”.

“We did not form a committee, we could not even have one case”, said Božović.

He explained that the previous agreement between consumers and traders on the acceptance of extra-judicial protection does not oblige consumers to initiate proceedings before the committee.

“What does that mean? It’s not good either for a trader or anyone”, Božović pointed out.

He believes that the content of the arbitration agreement concluded by the consumer and the professional (trader) should be regulated in the law in the essential terms and that, as he said, it includes the minimum of standards guaranteeing consumer protection.

The round table was held within the project “Improving Capacities of Civil Society Organizations and Consumer Protection System in Montenegro”, which is being implemented in partnership with the Consumer Center, Kvir Montenegro and the European integration Process Network MAEIP, with financial support by delegation of European union in Montenegro.