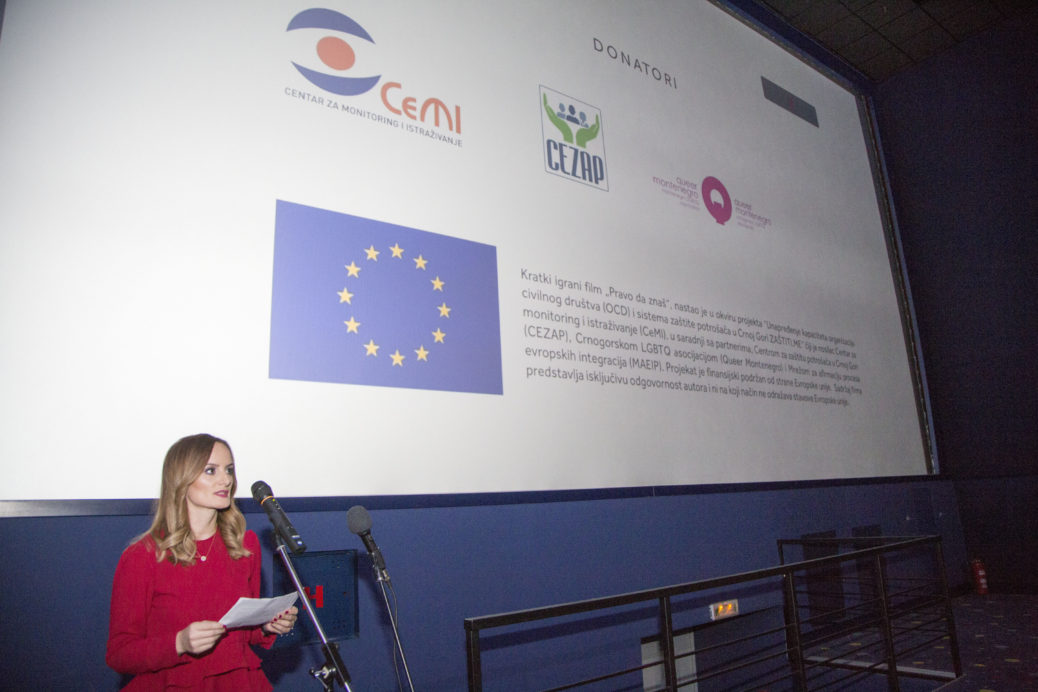 Protection of consumer rights in the next period must be one of the most important projects not only of institutions, but also organizations, it was announced at the premiere of the feature film “The Right to Know” and documentary-educational film “Homo Consumens”.

The films, which premiered last night in Cineplexx, are the result of mini grant winners within the project “Improving Capacities of CSOs’ and the System of Consumer Protection in Montenegro – PROTECT.ME”, which is run by the Centre for Monitoring and Research (CeMI), financed by the European Union through the EU Delegation in Montenegro.

Executive Director of CeMI, Nikoleta Tomović, said that the two films are, among others, the key results of the project “Improving Capacities of CSOs’ and the System of Consumer Protection in Montenegro – PROTECT.ME”, but also, as she explained, the process of mini granting implemented by CeMI within this project.

“The entire project, like these films, is aimed at providing support for the protection of consumer rights, raising awareness of consumers and business sector members in terms of their rights and obligations, as well as strengthening the participation of state and local government structures and also citizens themselves in creating an appropriate system for protection of consumer rights in Montenegro”, pointed out Tomović in the packed hall of Cineplexx.

CeMI, as she stated, got numerous results throughout the 2-year duration of the project.

She said that CeMI also published an Analysis of Judicial Practice in EU Member Countries and International Tribunals and announced that in the next period it will publish a comprehensive study which will contain an analysis on the field of consumer rights in Montenegro, with recommendations on how to improve the legislative and institutional framework.

General Director of National Brand Development and Consumer Protection at the Ministry of Economy, Jovo Rabrenović, reminded that the department, in addition to the project of these two films, also cooperated in the quiz of the NGO “Our Future” from Nikšić, which is the third mini grant winner of CeMIs’ project.

He evaluates that the Ministry of Economy made a significant step forward in the field of protection by opening an Advisory centre for consumers in Nikšić a month ago.

“All of this shows that there is real progress in the field of consumer rights protection and that there is great concern within the institutions of Montenegro that work in the field of consumer protection. Protection of consumer rights must be, not only to institutions but organizations as well, one of the most important projects in the following period, because only a consumer who knows his rights and knows how to react is a true protected consumer”, said Rabrenović.

Representative of the EU delegation in Montenegro, Miguel Magro Gomez, reminded that the mini grants, which the films were created with, were part of the project “Improving Capacities of CSOs’ and the System of Consumer Protection in Montenegro – PROTECT.ME”, which is, as he stated, supported by the EU with the goal of increasing awareness of citizens of Montenegro about consumer rights protection.

“We are pleased to see that Montenegro is directing attention to the implementation of EU standards and law, for improving the institutional framework in the field of consumer rights, through the activities of the NGO sector”, said Gomez.

The director of the movie “The Right to Know”, Branko Baletić, believes that the consumer right is one of the most important segments of civil rights.

“What was interesting during the NGO Culturum project is that we got the impression that consumers do not want to be protected. It’s almost unbelievable, but most people do not even know that there is a law for protection of consumer rights or they’re not ready to act when they feel decieved”, said Baletić.

That’s why it’s, as he evaluates, very good for large number of viewers to get the message, whether in feature or documentary form.

“I consider it an important segment of acquiring the civil liberties”, Baletić said.

Director of the film “Homo Consumens”, Blagota Marunović, said that the NGO CEZAM worked on the project for half a year.

“For three months our partners, Society of Sociologists of Montenegro, did research, which served us as a script. In addition, we have the reflection on the phenomen of the post-global society by professor Lidija Vujačić, from the aspect of consumerism that is present not just in Montenegro but the entire world”, as stated by Marunović.