Influence of politics the biggest problem in the work of courts 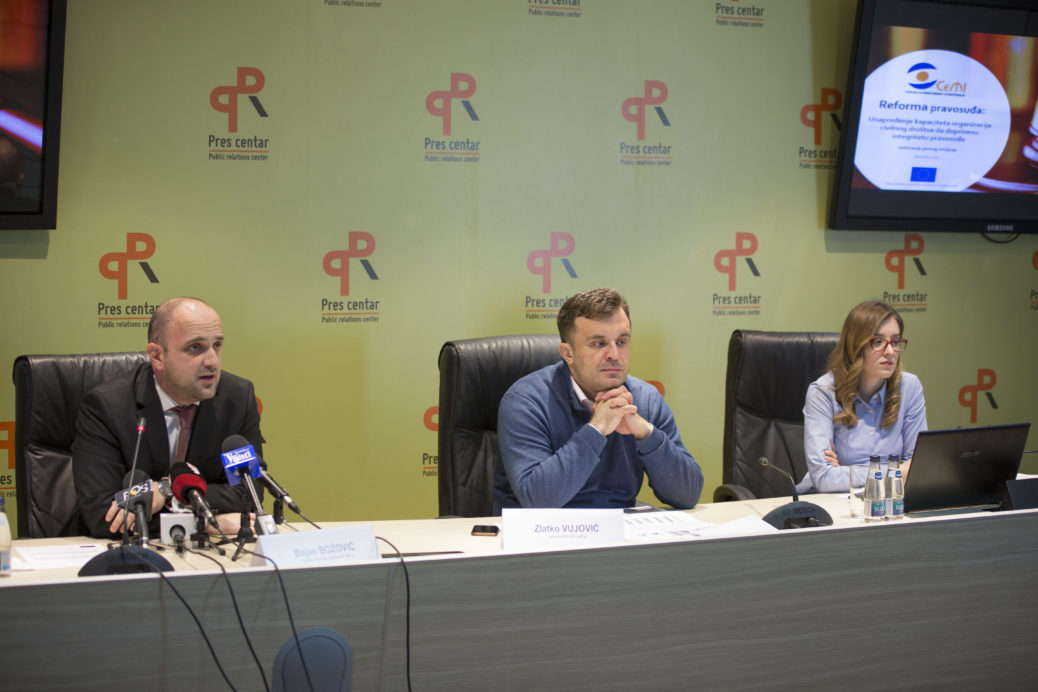 Nearly half of Montenegrin citizens have trust in the judicial system of Montenegro and they think the influence of politics is the biggest problem in the work of courts, as demonstrated by the research of Center for Monitoring and Research (CeMI).
The research coordinator in the Department for public opinion research, Milena Nikolić, said that 1. 032 adult citizens participated in the examination of public opinion on the trust of citizens in the judicial system of Montenegro.
”To the question of whether they have trust in the judicial system of Montenegro, 47,8% of respondents say they do, 37,1% say they don’t, while 15,1% say they don’t know the answer to that question“, says Nikolić at the PR Centre.
According to her, residents of the north show a higher degree of trust in the judicial system of Montenegro, so out of them 54% say they have trust, 46,3% of residents from the south have trust, while 44, 6% from the central region say they have trust in the judicial system.
”The biggest trust of respondents has the military with 55%, 48% of respondents say they trust the police and in the third place is the Ministry of Justice with 41%, 39% of respondents say they trust the Ombudsman, 38% trust the judiciary, 38% have trust in the Prosecutor’s office, while 36% of respondents say they have trust in lawyers“, pointed out Nikolić.
The media, as she says, gets the lowest grade in the research, which shows that 33% of respondents have trust in the media.
”To the question of estimating coruption on a scale of 1 to 5, 42,4% of respondents say that corruption is prevailing within the police, 41,3% say that coruption is prevailing in the judiciary, 39, 7% say that it’s in the Prosecutor’s office, 37,6% say that it’s in the Parlament, 35% say that it’s present in the Ministry of Justice“, says Nikolić.
The research has, as she explained, showed that 43,4% of citizens evaluate that the average citizen can expect to have a fair trial if for some reason they are a party in a court case, ‘’relative to 31% of respondents who don’t think that the average citizen can expect a fair trial.”
“That the judicial proceedings last unnecessarily long because the courts are not efficient enough think 69% of respondents, that the judicial proceedings usually last as long as necessary say 8,7%, while 3,8% think that the courts decide too fast”, says Nikolić.
She specifies that as the biggest problem in the work of courts the respondents point out the influence of politics.
“So we see that 41,2% of respondents evaluate this as the biggest problem in the work of courts, 19,7% of respondents say that the biggest problem is the lenght of court proceedings, while 16,5% of respondents point to corruption as the biggest problem”, says Nikolić.
As she said, the research has shown that 46,5% of respondents evaluate that the Prosecutor’s office in Montenegro doesn’t decide independently on who to prosecute, 33,3% of respondents have a positive attitude regarding this question, and 17,3% of respondents can’t decide.
President of the Governing Board of CeMI, Zlatko Vujović, said that it came to a minor improvement of trust in the judicial system relative to the last research from december 2017.
“It is possible that different factors influenced it, but one of the main reasons for the improvement is the start of live coverage of court proceedings”, says Vujović.
He thinks that it’s important to pay attention to the number of people who are undecided.
“In certain situations, as the level of trust grows, the level of undecided reduces, and as the trust goes down, the number of undecided grows. The gap between those who have trust and those who don’t varies around 10,7% in favour of those who do have trust in the judicial system”, says Vujović.
While speaking about the trust in institutions, he said that the results are pretty similar relative to previous research.
“Except for the police, which significantly deviates because it has a stronger trust level relative to 2016. That can correspond with frequent actions being carried out related to raiding real estate in the ownership of criminal groups, their arrest, so that has influenced the trust of citizens to somewhat rise”, explains Vujović.
Head of Legal Department of CeMI, Bojan Božović, says that the goal of the project “Judiciary reform: Improving capacities of Civil Society Organizations in contributing to the integrity of the judiciary”, financially supported by the European Union through the Delegation of the EU in Montenegro, is improving capacities of CSOs in monitoring the processes regarding the rule of law.
The goal of the project, which CeMI is implementing in partnership with Center for Democracy and Human Rights (CEDEM), is, as he explained, also monitoring all the segments widely known as rights and obligations from the Chapter 23, as one of the most significant chapters that Montenegro deals with in this period.
“One of the most important segments of this project is monitoring trials. To be able to do these activities, it was necessary for us to do a public opinion survey regarding the trust in the judiciary system, while giving special attention to the level of citizen’s trust with regard to the work of the judiciary and the Prosecutor’s office“, says Božović.
He announced that in the next period the monitors of CeMI will have the possibility to watch judicial proceedings and take care to what extent are activities being implemented which Montenegro, as he says, took over by ratifying relevant international agreements, the Constitution and laws that are enforced in Montenegro.