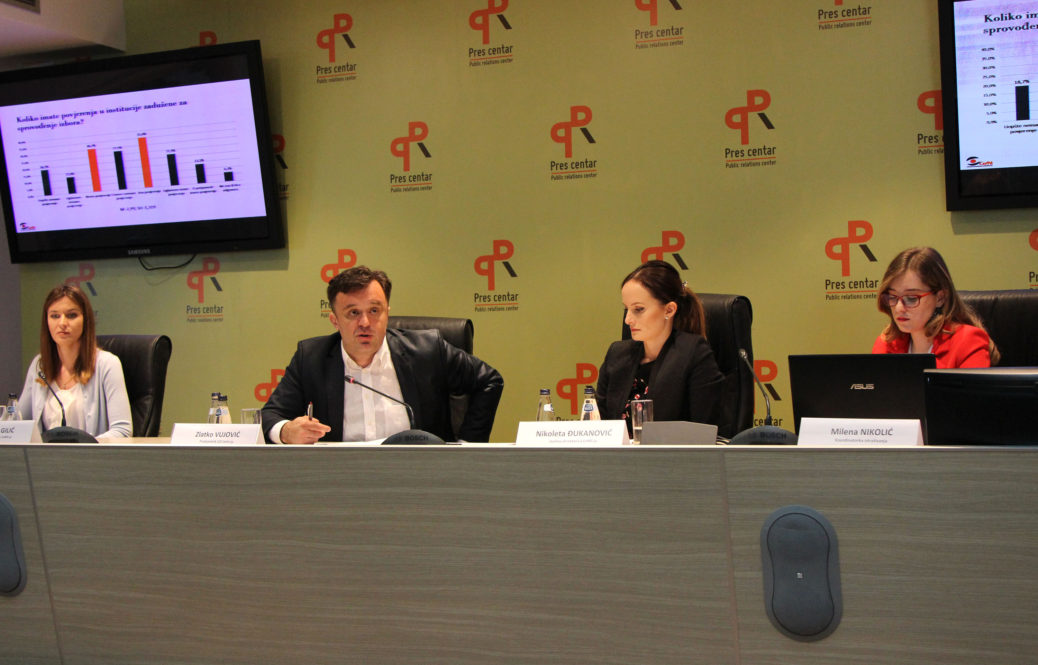 Montenegrin citizens mistrust the work of institutions responsible for conducting elections, and 60 percent of them believe that corruption is present in the political system, according to a research of Centre for Monitoring and Research CeMI.

The research “Citizens confidence in the electoral system” was conducted from the 10th to the 31st of March this year on a sample of 1.019 adult citizens, within the project “Let the Fair Elections Become a Habit! – Building Trust in the Integrity of the Electoral Process in Montenegro”, supported by the European Union.

The Research Coordinator at CeMI, Milena Nikolic, said that 60.2 percent of respondents said that corruption is present in the political system of Montenegro.

According to her, confidence in the institutions responsible for conducting elections have 35,4% of respondents.

She said that respondents who are members of a political party have more confidence in the election authorities, with 49.9 percent of them saying that they have confidence.

“The respondents who said that they are not members of a political party, 31.5% of them said that they have confidence in the election authorities”, said Nikolic.

According to the opinion of 70,6% of respondents, as she stated, the polling boards should be consisted both of local administration officials and representatives of political parties.

She said that 60.7% of respondents state that The State Election Commission should be consisted both of representatives of political parties and independent experts, with the expert domination.

“That party leadership should be elected on elections where all interested citizens could participate, evaluate 45,1 percent of respondents. In relation to data from 2016, we see a mild growth in the number of respondents who answer positively to this question, when that number was 32 percent”, said Nikolic.

Nikolic said that 45,5 percent of respondents evaluate that the Parliamentary elections of 2016 were fair and free, compared to 32,6 percent of them who gave a negative answer.

She stated that 52,7 percent of respondents said they are satisfied with the way democracy works in Montenegro.

President of the Governing Board of CeMI, Zlatko Vujovic, said that after several electoral processes which had an intervention in the electoral framework, “we are in a situation where we have a dysfunctional, ineffective and inefficient electoral administration”.

“We have come to a point where members of the SEC don’t respect the law, rather making decisions in accordance with party interest, and the work of municipal electoral administrations is under similar pressure. When it comes to polling boards, we once again have a situation where members of that body sign the records only based on the party’s decision, and not based on what they saw during election day”, stated Vujovic.

He evaluates that a comprehensive electoral reform was necessary, which wouldn’t deal exclusively with the question of electoral administration, but also with the change of the electoral system.

“The existing electoral system has completely deprived the citizen of influence on who will be a representative in the Parliament of Montengro”, said Vujovic.

Vujovic answered the journalist’s question about what can be concluded based on this research, by saying that it can be concluded that the citizens are not satisfied with the politization of work of the state organs.

“Very low grades got some bodies such as Agency for Prevention of Corruption, which also got the lowest grades, and by speaking about how they would like to see the administration we see that citizens prefer solutions where the influence of political parties is reduced”, stated Vujovic.

According to him, it can be concluded that citizens have a large distrust in the institutions “which is especially visible in the case of opposition voters”.

Executive Director of CeMI, Nikoleta Djukanovic, said that the main target groups of the project ““Let Fair Elections Become a Habit! – Building Trust in the Integrity of the Electoral Process in Montenegro”

“Special attention during the realization of this project will be given to questions of anti-discrimination towards the Roma minority, who do not have equal rights as other minority by the law in Montenegro, and especially women, who are still inadequately represented at all levels”, stated Djukanovic.

According to her, CeMI will, within this project, form an expert team with previous electoral background, which would conduct quality and thorough assessment of key disputed areas of elections and previous challenges in electoral processes.

“Additionally, we will assess practice and the conduct of legal analysis of the electoral process in Montenegro by the previously mentioned expert teams, we will develop a report in the form of policy analysis, which will be used by working groups for development of policy papers, and at the end of this project we will conduct another public opinion research to measure the perception of citizens on the electoral framework and the elections which will be conducted”, said Djukanovic.

She said that CeMI will organize local consultations with citizens from all municipalities of Montenegro through public discussions, where they will be able to participate in discussing about all relevant subjects when it comes to electoral reform.

PR Coordinator of CeMI, Teodora Gilic, stated that the specific objective of this project is to increase the level of public trust in the integrity of the electoral process, by advocating for adequate changes of institutional and legal electoral framework, in accordance with international standards, thus building a consensus within the political society and civil society organizations in Montenegro.

You can download the presentation from the press conference here.