Fight against corruption requires a more proactive approach by institutions 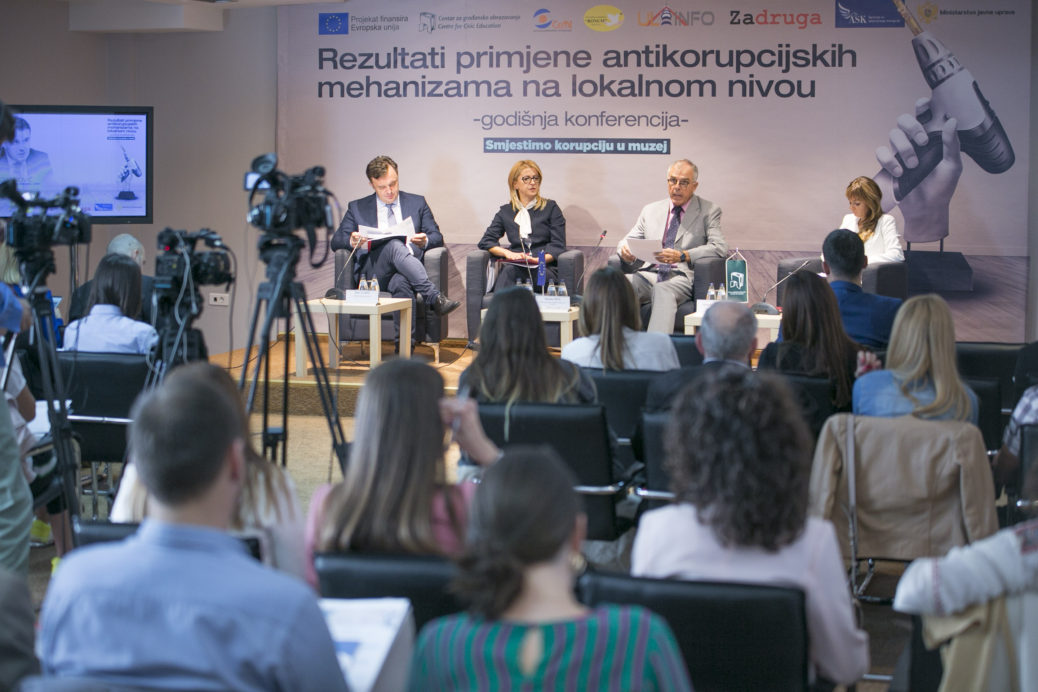 In Montenegro, in the fight against corruption, a more proactive approach is required and the cooperation of all competent institutions at the national and the local level, and the support of CSOs, the media and citizens is a precondition for results in that field.

It was evaluated in the opening statements at the national conference within the project “Let’s Put Corruption into Museum”, organized by the Centre for Monitoring and Research (CeMI) and the Centre for Civic Education (CGO), with the support of the EU Delegation to Montenegro.

Minister of Public Administration, Suzana Pribilovic, said that the integrity of local officials and deputies and the fight against corruption at the local level, are the key characteristics of a new approach in the functioning of local self-government units.

“Also, in our local governments, besides legal, ethical rules and standards of behavior which apply to all holders of public functions and employees at the local level, have been determined”, stated Pribilovic.

According to her, by passing the Law on Local Self-government, social values like ethics and responsibility are emphasized and highlighted.

“Regulations which regulate the questions of status of local officials, human resource management, training of local officials, strengthening the transparency of work, employment, supervising the work of organs of local self-government, directly contribute to strengthening the integrity and the successful fight against corruption, i.e. they are the foundation of corruption prevention at the local level”, pointed out Pribilovic.

She stated that the fight against corruption must be a large-scale social action, in which all state organs, interested organizations, business entities, NGOs, citizens and the media will be included.

Executive Director of CGO, Daliborka Uljarevic, said that the consequences of corruption in a society are multiple and complicated, at the national and local level as well.

“They are especially visible and directly influence citizens’ lives in their communities and as such they have the most harmful consequences. For the local communities to stand up against corruption more efficiently, it is necessary to, first, realistically perceive the conditions and causes that encourage its formation, functioning and development and clearly map out the areas susceptible to corruption”, pointed out Uljarevic.

She said that in Montenegro a comprehensive and realistic analysis of the situation by the institutions, when it comes to corruption, does not exist.

“We also do not see their measurable results, and the existing mechanisms are disfunctional because they do not arise from a strategic approach to solving this problem, but from a formalistic adoption of documents and the attempts to sweep this issue under the carpet. So, the impression is formed, that the institutions in Montenegro feed, hide and protect the

corruption system more than they work on discouraging those who go down that road, their discovery and processing”, stated Uljarevic.

She pointed out that it was not know who, at the national level, was competent to lead this process and support and strengthen the local self-governments in the fight against corruption, supervise their work in that direction and analyze the effects of the actions taken.

“On the other hand, the citizens dominantly recognize corruption being unpunished, i.e. the dysfunctional system of processing identified cases of corruption, as the reason for the low level of activism in the fight against corruption, which are public opinion research from last year points to, conducted by IPSOS Strategic Marketing”, stated Uljarevic.

She said that the analysis of performance by local self-governments in this year, confirms that basis for this result exists.

“In the past year the municipalities have not received a single citizens’ report about cases of corruption, which municipalities notified us about and which is very concerning. If you count the information that most of the municipalities did not make an internal instruction for keeping records on reports of corruption within the institution and acting in accordance with those reports, we get a clearer picture and we cannot be surprised by these findings”, thinks Uljarevic.

She evaluated that the problem of corruption at the local level will not go away on its own, “it will not disappear without painful cuts and effective processes in front of state organs, which also requires a clearly expressed political will to put an end to this occurrence”.

“That’s why a proactive approach and cooperation of the institutions in charge at the national and local level, with the support of civil society organizations, the media and citizens is of essential importance and the precondition for the results in this area”, pointed out Uljarevic.

“Only that kind of system can move local communities and citizens, and consequently lead to establishment of a functional rule of law and an environment in which corruption will not be socially tolerated, but unacceptable and punishable occurrence”, pointed out Uljarevic.

Hermann Spitz, The Head of Cooperation Section in Delegation of EU to Montenegro, evaluated that Montenegro achieved certain progress in the fight against corruption, stating that that occurrence is still present in numerous areas, and “is causing concern”.

He said that the local self-government represents the closest level to the citizens.

“Public responsibility of decision makers in local self-governments is a precondition for an efficient fight against corruption”, said Spitz.

He thinks that local self-government needs to find innovative solutions and use modern management practices “according to the principles of transparency and equal approach”.