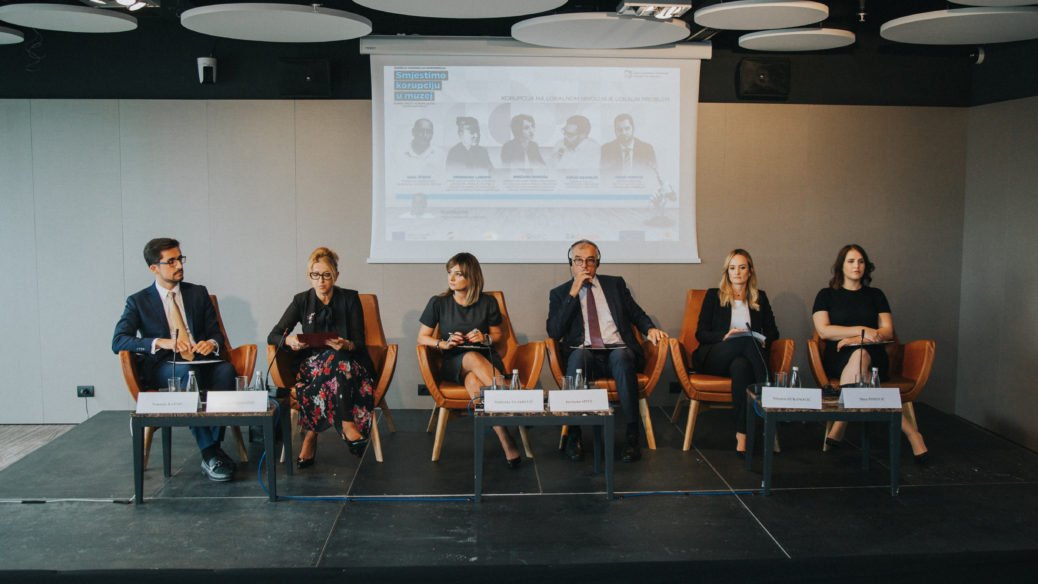 Podgorica, PR Press Service – Although there is a great responsibility on the local level, corruption at the local level is not only a local problem, and the fight against corruption requires a multisectoral and comprehensive response.

This was concluded at the annual national conference on fighting corruption at the local level, organized by the Centre for Civic Education (CGO).

The Executive Director at CGO, Daliborka Uljarevic, said corruption is spreading through grey channels of various interests throughout the system.

She believes that one society might say that becoming resistant to systemic corruption must, as she indicated, have responsible and controlled decision-makers in all relevant institutions, final judgments for top-level corruption, but also proactive citizens.

“Only in this way can we develop a sustainable prevention system, and only in such a framework, repressive measures will not be a means of political reckoning, but an expression of a dedicated and indiscriminate fight against corruption that will change our society for the better,” said Uljarevic.

According to her, the preconditions for a successful fight against corruption are the existence of an unquestionable political will, a functioning anti-corruption legislative and institutional framework, as well as continuous, consistent and substantive implementation of strategic documents.

“Consequently, the lack of results should be sought precisely in the absence of a political will, the inefficiency of the set system, but also in the chosen formalistic approach to this issue by competent institutions at the national and local level,” said Uljarevic.

Uljarevic is of the opinion that the Government must change the system of unequal treatment of municipalities depending on who is running them, and that the Prosecutor’s Office, the Agency for prevention of corruption (APC) and the State Audit Institution (SAI) must give the necessary stamp to fight corruption, “without selectivity and the inertia that characterizes their work today.”

“I believe that our citizens have understood that the fight against corruption and its bearers is an essential fight for our future and a better quality of life,” she said, concluding that “the development of citizens  activism is the hardest hit for systemic corruption.”

The Executive Director of the Centre for Monitoring and Research (CeMI), Nikoleta Djukanovic, presenting a report on the effectiveness of competent state prosecutors’ offices and courts in the fight against corruption, noted that a worryingly small number of corruption cases were initiated, which were initiated in 2017 and 2018.

“This trend is also characteristic of the previous period. A significant number of basic state prosecutor’s offices did not have cases for this type of crime at all, said Djukanovic.

She explained that only six prosecutor’s offices received replies, although they sent a request for free access to information to each, with the conclusion that there could be a conclusion that there was no unique methodological approach for keeping records of this type of crime, “what we consider problematic, given their importance.”

“Two cases are pending in Kotor against five persons for the criminal offence of abuse of office. Four criminal charges have been filed in Ulcinj in relation to corruption at the local level. In Rozaje, we have two cases related to violation of employment equality, one case concerning tax evasion and contributions, allegations of false content and three cases concerning malpractice in the service. The prosecution offices in Kolasin and Pljevlja informed us that they did not have any cases related to the prosecution of corruption”, said Djukanovic.

“It is worrying that the number of unresolved criminal charges against payment transactions and business is increasing,” said Djukanovic.

She said that the fight against corruption at the local level should be conducted within the basic state prosecutor’s offices and basic courts.

The Head of the Cooperation Sector of the Delegation of the European Union to Montenegro, Hermann Spitz, said that good governance and the rule of law are fundamental for every democratic state.

He is of the view that decentralization of governance and public accountability of local decision-makers are prerequisites for an effective fight against corruption, especially given that the level of local self-government is closest to the citizens.

“Prevention of corruption contributes to the growth of municipal revenues and, consequently, to better opportunities for local government development. It also leads to the improvement of the quality of citizen-related services that put citizens in focus and thus strengthen public confidence in their work”, as he said.

He said he was pleased to see more and more Montenegrin citizens at the local level “raising their voice”, pointing to corruption cases and taking action to protect the public interest. “And expressing dissatisfaction is not only a right but also a duty of the citizens,” said Spitz. “Ignoring corruption means denying citizens the benefits of development, including the quality of services. Public resources should serve the public interest and not the interests of individuals, he emphasized.

“Corruption at the local level, as in any other form, will not disappear on its own. It requires action, painful cuts, effective processes to be carried out by competent authorities, but also strong political will”, said Spitz.

Minister of Public Administration, Suzana Pribilovic, thanked the CGO and CEMI, as well as their partner organizations at the local level, “which, through these activities, perpetuate the transparency of local governments and anti-corruption policies.”

She said corruption threatens the universal principle of equality of citizens before the law and has broader implications.

“Therefore, the fight against corruption at the local level, as the first and the closest level to citizens and the economy, is a key challenge in building the rule of law, as the cornerstone of a democratic society that Montenegro also strives for,” she stated.

“Unfortunately, we often forget that one of the basic features of democracy is the transparency of the system. It is in transparency that the beginning and end of all our efforts to fight corruption lies … We are aware of the fact that a good public administration is only one that is a genuine citizen service at all levels and at all times and is aware that it is there for the citizens who pay it, said Pribilovic.

She reminded that in the previous period, through the adoption of the new Law on Local Self-Government and the Action Plan of the Open Government Partnership Initiative, the Ministry has initiated a number of activities that should contribute to improving the transparency of local self-government.

“At the same time, through the implementation of the optimization process, as well as the appropriate implementation of the new Law on Civil Servants and State Employees on the local new, we have significantly improved the transparency of the hiring process, as well as the civil servant system, which is the engine of any quality administration”, explained Pribilovic.

She reminded that the Government had also adopted an Operational Document for the Prevention of Corruption in Areas of Special Risk – as an Annex to the Action Plan for Chapter 23 – Judiciary and Fundamental Rights, which covers the area of local self-government among the seven areas particularly at risk of corruption. Finally, she expressed her conviction that “local governments will also focus their activities on implementing local action plans to combat corruption in the coming period.”

State Secretary at the Ministry of Finance, Nemanja Katnic, said that the area focused on strengthening the stability of public finances, establishing effective regulation, as well as increasing the transparency of the system with the full awareness that reducing the risk of corruption is one of the preconditions for successful implementation of reforms.

“In that sense, progress in achieving that long-term goal also depends on the introduction of internal controls. A well-established system of internal controls significantly reduces the possibility of corruption in public sector entities”, said Katnic.

According to him, strengthening accountability for decisions and budget management is crucial for effective public administration and the fight against corruption in it.

“The Ministry of Finance recognized the importance of establishing a risk management process in the public sector and provided a good framework for managerial accountability and the establishment of internal controls for risk management, including corruption risks, in the Law on Governance and Internal Control in the Public Sector”, said Katnic.

“The decisions from the Law improve the system of control and purposeful spending of budget funds and establish a greater degree of budgetary fiscal discipline by local self-government units,” he concluded.

Coordinator of CGO programs, Mira Popovic, said, presenting some of the key findings of the annual report on the implementation of mechanisms for prevention and fight against corruption at the local level in Montenegro, that the practice of inertia of municipal administrations in relation to commitments defined by national documents, “in the absence of proactivity, that is, an initiative for their own designed activities.”

She said that integrity plans, as a new mechanism for preventing the emergence and development of corrupt behaviour within the local self-government bodies in Montenegro, have so far proved to be dysfunctional.

“The data indicate that there is a continuing trend of failure to implement key measures that should contribute to the prevention of corruption at the local level, such as, for example, hiring qualified staff and filling systematic posts in certain organizational units. This indicates that integrity plans are failing to disrupt the party employment system in municipalities, and this is one of the strongest causes and consequences of corruption at the local level, Popovic concluded.

The project Let’s Put Corruption in a Museum!, implemented by the CGO in partnership with the Centre for Monitoring and Research (CEMI), NGO Bonum from Pljevlja, NGO UL-Info from Ulcinj and NGO Za Drug from Petrovac, in cooperation with the Anti-Corruption Agency and with the support of the Delegation Of the European Union in Montenegro and the Ministry of Public Administration.