Judicial Reform: Upgrading CSO’s capacities to contribute to the integrity of judiciary 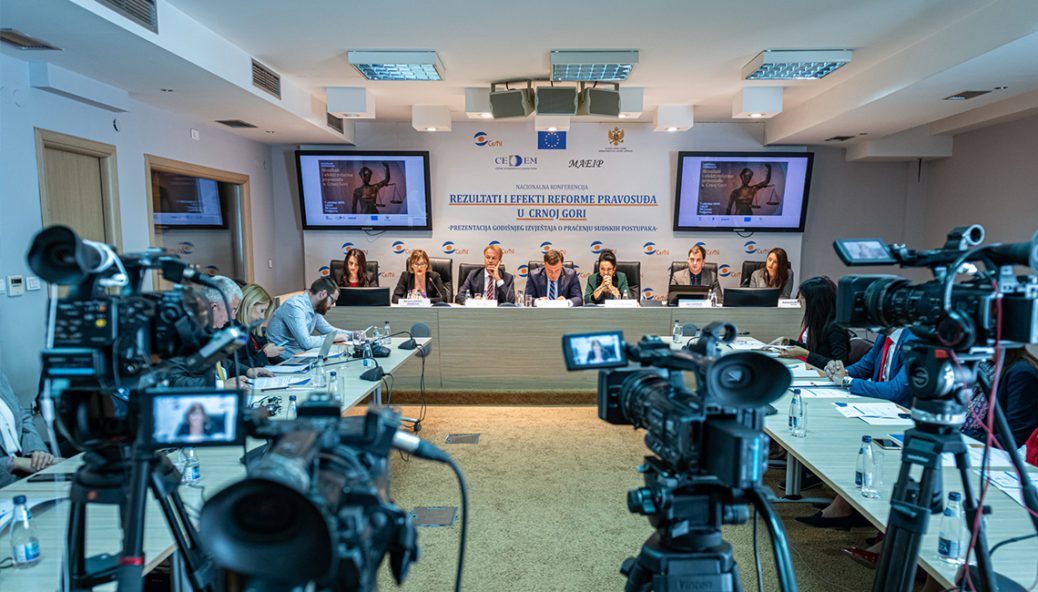 The judicial reform did not fully produce the desired results, despite significant progress in the previous period, in terms of shortening the length of the proceedings, improving the enforcement procedure, and the successful introduction of new institutes within the judiciary.

This was announced at the national conference “Results and Effects of Judicial Reform in Montenegro” organized by the Centre for Monitoring and Research (CeMI).

CeMIs’ president of the Governing Board, Zlatko Vujovic said that the lack of judicial reform had not fully delivered the desired results reflected public confidence in the judiciary.

“According to public opinion research by our partner on this project CEDEM, trust in the judiciary has dropped from 49.1 percent in March 2018 to 40.8 percent in July 2019. Unfortunately, the prosecution’s data is not available. CeMI did the latest survey on the trust of the judiciary in 2017, so we have no recent data, “Vujovic said.

According to him, the problem remains that citizens do not have the necessary level of confidence to the Montenegrin judicialy system.

“We cannot ignore objections to the existence of political influence on judicial authorities, but it is necessary to provide an institutional response to this challenge,” Vujovic said.

He believes that the EU’s special focus is on the disciplinary and ethical responsibility of judicial functionaries, “given the fact that no single disciplinary proceedings have been initiated against prosecutors this year, with only one trial against judges, while at the same time, we are witnessing numerous indictment proceedings and millions of damages resulting from ineffective investigations and acquittals. ”

“The lack of accountability for these cases and the open questions of whether on Wednesday ignorance, urgency or inappropriate influence are something to focus on and provide the necessary clarifications to enhance citizens’ confidence,” Vujovic said.

He said that the entering of the cameras into the courtrooms made progress in terms of the publicity of the trial, “but numerous shortcomings were also revealed.”

“It is not enough to just establish public trials, but there is a need to work further on the argumentation of the actions of judges, in order to educate citizens, but also in order to apply the law equally for all,” Vujovic explained.

He said adopting the new Justice Reform Strategy for 2019-2022 “encourages but also raises the question of its usefulness if we do not have an assessment of the effects and impact of the two previous strategies.”

The President of the Supreme Court of Montenegro, Vesna Medenica, said that she welcomed the work of non-governmental organizations, which she said, through their fact-based research, contribute to assessing the situation in the area of ​​professionalism, efficiency, transparency, integrity and accountability of the judiciary.

“In order to ensure the right to a fair and public trial within a reasonable time before an independent, impartial tribunal, respect for the right to a fair trial is necessary. During the main trials, the courts respected the presumption of innocence, both through their conduct at the hearing and in official public statements.” Medenica said.

According to her, she is concerned that the media continue to violate the presumption of innocence when reporting on criminal proceedings, that is to say, the print media in 16 percent, the television in 13.8 percent, and the portals in six percent.

“The frequent occurrence of violations of the presumption of innocence in the headline indicates that the media do not want to genuinely disseminate information about the work of criminal justice, but to strive for sensationalism. You have highlighted important issues that have been identified within the judiciary itself, such as spatial deficiencies, the unsatisfactory financial standing of judges and the low level of security of judges, court administration and property in the courts, ”Medenica said.

She emphasized that these factors call into question the authority and regular functioning of the court, “the obligation to respect and protect the right to a fair trial and the efficiency of the proceedings.”

“Therefore, it is in the interest of justice to provide space for courts in Podgorica as well as courts in the territory of Bijelo Polje Municipality as soon as possible, and we are working intensively on this,” Medenica said.

She said that she was informed by the research data that out of 263 hearings, 100 or 38 percent were postponed.

“Also concerned is the fact that in one criminal case, the crime of grave murder was postponed because the courtroom where the trial was to be held was not available within the scheduled time. Therefore, the question arises of the expediency of discussing other topics in the field of judicial reform when the basic precondition in the form of the necessary infrastructure is not fulfilled, “Medenica said.

As she pointed out, the result in the judiciary will depend on the degree of respect for that precondition.

“In the previous period, the courts have achieved much in the field of transparency. Currently, the Supreme Court of Montenegro is preparing and establishing a Public Relations Service, which will have jurisdiction to distribute all relevant information from the courts to the citizens, ”Medenica said.

The head of the EU Delegation to Montenegro, Aivo Orav, said that the rule of law, including the proper functioning of the justice system and the effective fight against corruption, would remain at the heart of the EU accession process when it comes to Montenegro.

“In our annual Report on Montenegro, we emphasized that it will be of particular importance to improve the independence and professionalism of the judiciary in improving the management of human resources. We also emphasized the need to enhance accountability, through the application of a code of ethics and disciplinary action by both the judge and prosecutors, ”Orav said. He said it was essential to streamline the judicial network.

“Montenegro has made some progress over the past year in terms of capacity building in terms of human resources and disciplinary responsibility. However, much remains to be done and the EU will continue to support you, ”Orav said.

The General Director of the Directorate for Justice at the Ministry of Justice and the head of the negotiation team for Chapter 23, Marijana Lakovic-Draskovic, recalled that in September 2019 the Government adopted a new Judicial Reform Strategy for a four-year period with a two-year plan.

“In line with this strategic document, reform activities have been adopted that will be directed towards achieving several strategic goals in the coming period. Further strengthening of the independence, impartiality and accountability of the judiciary remains Montenegro’s priority in the European integration process, “Lakovic-Draskovic said.

She said a greater level of efficiency of the justice system would improve the quality of respect for human rights and the rule of law.

“Strengthening the accessibility and transparency of judicial institutions in the coming period should result in a greater degree of citizen confidence in the judiciary. The reform processes will contribute to the advancement of international and regional judicial cooperation and further capacity building of judicial institutions, ”said Lakovic-Draskovic.

CEDEM Executive Director Milena Besic said that further strengthening of the independence, impartiality and accountability of the judiciary remains Montenegro’s priority in order to strengthen the rule of law in the European integration process.

“In this respect, the Montenegro Progress Report for 2019 states that the Montenegrin judiciary is moderately prepared and that some progress has been made, but that the result of reforms is still limited. Without an effective justice system, it is not possible to establish a complete rule of law or carry out the necessary reforms.”Besic said.

She said that one of the most significant project activities carried out by CeMI within the project was aimed at monitoring criminal court proceedings in the courts in Montenegro.

He said the recommendations in the Report indicated that it was necessary to respect the presumption of innocence both by the court and by other actors in the proceedings and by the media.

“We appreciate the need to provide training for members of the public on the challenges and solutions that can be prevented from violating the presumption of innocence as an important procedural principle,” Vukcevic said.

He emphasized that in all situations the court should give the impression of impartiality and independence.

“The monitors did not identify any occurrences or behaviors that would indicate violations of the principles of judicial independence and impartiality during court proceedings. However, in several cases cases were observed that just before the main trial the judges were sitting in a courtroom and talking with only one party in the proceedings, a representative of the State Prosecutor’s Office, which was the case in one of the previous reporting periods, so this practice should be avoided, ” said Vukcevic.

He said it was necessary to ensure full respect for the principles of public proceedings by highlighting and updating the list of scheduled trials through the publication of convictions and plea agreements.

The conference was held as part of the Judiciary Reform project: Building the capacity of civil society organizations to contribute to the preservation of the integrity of the judiciary, in cooperation with the Centre for Democracy and Human Rights (CEDEM) and the Network for the Affirmation of European Integration Processes (MAEIP). Project is co-financed by the European Union and Ministry of Public Administration of Montenegro.

Through this project, CeMI supported the projects of six civil society organizations in the total amount of EUR 47,759. These are: Human Rights Action of the HRA, Media Union, Professional Media Society, Youth with Disabilities Association, Centre for Political Education and European Youth Center of Montenegro.

In the next few months, CeMI will present three more thematic reports: on the implementation of the plea agreement, respect for the right to a trial within a reasonable time, and on the system of enforcement of court decisions.