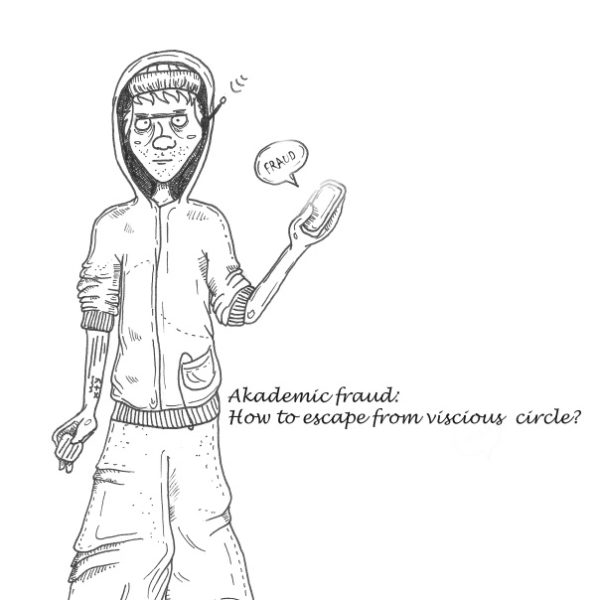 Akademic fraud: how to escape from viscious circle?

Academic fraud, in the most general sense, represents any form of violation of the prescribed rules and procedures which are defining modalities of acquisition of academic titles. Although academic fraud, directly or indirectly, may involve academic staff, this term is usually linked with student cheating, i.e. students’ attempts to circumvent the prescribed rules and procedures in fulfilling their academic obligations. There are many forms of students’ cheating such as: copying and cheating on exams, plagiarism of essays and other papers, use of another people ideas without citing sources, forging professors’ signatures and documents, switching of identities on exams and so on.
Academic fraud is one of forms of the corrupted behavior. In fact, since corruption means any kind of abuse of public position for personal gain, by cheating students also abuse their position in order to avoid obligations – studying.
Academic fraud is a frequent form of corrupted behavior in high education, which can have multiple negative consequences. Students are using this type of dishonest tools can graduate with bad working habits, insufficient knowledge, followed by problematic principles of conduct and they could continue with such behavior in future professional life. These consequences have negative impact on a whole society and it is necessary to act on their suppression by changing the policy in the high education system. In this sense, the group of students has launched a project Student ethic initiative. Within this project problems related to academic fraud at University of Montenegro were identified and examined, in order to create  recommendations on necessary changes in regulation and strategic policies of this area.
For the purposes of Student ethic initiative project, Integrity Association has founded as an informal group of students, who has planned and coordinated activities carried out under this project. In order to create this brief, members of Integrity Association have conducted a survey on a representative sample of 836 students and organized six focus groups (two in Podgorica, two in Nikšić, one in Kotor and one in Bijelo Polje) where acauses and frequency of academic fraud at University of Montenegro were discussed. This research was methodologically limited by large difference between students perception about occurrence of cheating on faculties and their personal experience in performing academic
fraud. However, this difference is expected because the assumption is that students will not admit that they acted contrary to their duties and rules, especially when it comes to more serious forms of fraud.
Except data obtained by these methods, brief also contains a comparative analysis of regulation of cheating at universities in the region and the world’s prestigious high education institutions.
The purpose of this brief is to concisely identify the problems that exist and arise in the fight against various forms of academic fraud at the University of Montenegro, and to define recommendations  implementation of which would contribute to the improvement of policy in this area.