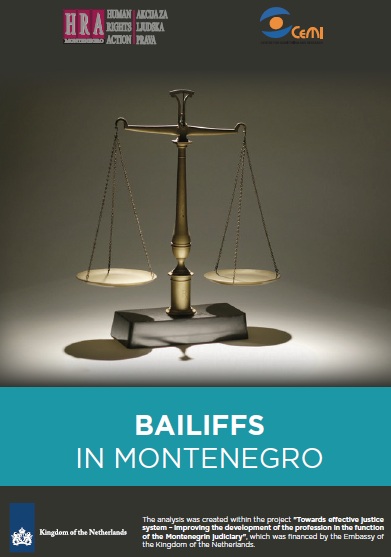 Within the framework of reform of Montenegro judicial system, with the aim of synchronizing the work of judicial institutions with the values, standards and practice present in the European Union member states, a reform of the enforcement of the system of legally binding judgments was carried out. In this way, after several years of agreeing on and rewriting it, the work of bailiffs was legally regulated through the Law on Bailiffs, which was adopted in 2011 and came into effect in January 2014 (Official Gazette of Montenegro 61/11).
Besides that key law, the work of bailiffs is predominantly regulated by the Law on Enforcement and Securing of Claims, also adopted in 2011 (Official Gazette of Montenegro 36/2011). Both laws represent the legal basis for the public work of bailiffs in the system of judicial functions in Montenegro.
After its fairly blurred and not-so-successful initial activities regarding the establishment of the bailiff system (only 12 candidates applied for the first call to fill 32 positions), the first bailiffs started their work on 7 April 2014, performing “the function of bailiff as a public service, independently, professionally and as their only occupation“1.
Initially, bailiffs’ offices started their work in the Basic Courts in Podgorica, Berane, Herceg Novi, Kotor, Pljevlja, Plav, Rozaje and Zabljak. Today, bailiffs also cover all the other regions in Montenegro, with the rule that jurisdiction in a particular territory is distributed in accordance with the principle that one bailiff should be appointed for every 25,000 citizens.
Hence, after initial problems regarding the distribution of bailiffs to all regions, the final list of cities where the function of bailiff exists was expanded, besides the above mentioned, to Niksic, Bijelo Polje, Danilovgrad, Cetinje, Ulcinj, Bar and Budva. With this, the system of bailiffs in Montenegro was both institutionally and territorially established.
In practice, however, in particular municipalities we still have cases where there are insufficient bailiffs compared to the numbers determined by law, which is mostly the consequence of the fact that a decrease in the number of applications for that function has been registered. In such cases, the function of bailiff is given to a bailiff of a neighboring area.
However, besides these insufficiency, since the beginning of the implementation of the Law on Bailiffs and the new Law on Enforcement and Securing of Claims, much of the process of realization and functioning of the provided solutions in practice was followed by many controversies, regardless of whether it was to do with the implementation of legislative frameworks in legal life – through the practical action of bailiffs, all the way to the social, economic and legal consequences that came out as a result of their systemic or individual activities.
The entire set of problems that was created based on the shortcomings of the legal framework or the inconsistent or illegitimate practices of bailiffs, has become one of central social problems in previous years, and therefore was the focus of many social, private and public entities.
In the following pages of this study, we will try to make a certain summary of the situation this field currently is in, but also this study represents the contribution of civil society organisations in the field of preventing or stopping unlawful or criminal practices, as well as a contribution to overcoming problems in the functioning of enforcement and the finding of the best and most innovative solutions to improving legal and institutional fields.