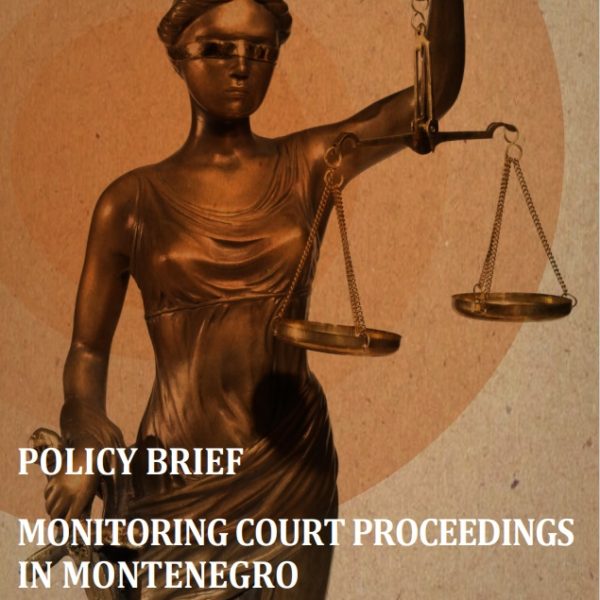 The Centre for Monitoring and Research (CeMI), in cooperation with the Center for Democracy and Human Rights (CEDEM), European Integration Affirmation Network (MAEIP), and with the support of the European Union and the Ministry of Public Administration of Montenegro is implementing a project entitled “Judicial Reform: Upgrading CSO’s capacities to contribute to the integrity of the judiciary” (hereinafter „the project“).

The project aims to contribute to the achievement of a higher level of rule of law in Montenegro, reflected in increasing the level of professionalism, accountability, efficiency, and integrity of the judiciary while strengthening cooperation between civil society and judicial institutions. The project aims to strengthen the capacities of local organizations and greater involvement of civil society in Reform of the Judicial System in Montenegro, as well as in accession negotiations under Chapter 23 (Judiciary and Fundamental Rights).

In the first reporting period, they monitored 150 cases (263 main hearings) by attending the main hearing, and the findings were presented within the first annual report on monitored trials in the previous year. In the second reporting period, observers monitored 492 cases by inspecting case files in all basic courts and the High Court in Podgorica and Bijelo Polje. Monitoring court proceedings are conducted in accordance with the principles defined in the Memorandum on cooperation concluded between the Supreme Court of Montenegro, CeMI, and CEDEM, at the beginning of the project realization.

In addition to the two annual reports, reports and policies on trial within a reasonable time, the implementation of plea agreements and the work of bailiffs were published. In cooperation with the PR center, two annual reports were created to assess the respect of presumptions of innocence by the media when reporting on court proceedings. In addition to the mentioned activities, six projects of local CSOs were supported within the project (Human Rights Action, European Youth Center, Trade Union of Media, Center for Political Education, Association of Professional Journalists of Montenegro, Association of Youth with Disabilities of Montenegro) and four seminars were organized for their representatives with the aim of strengthening their capacities in the field of judicial reform. Also, 20 in-depth interviews with representatives of the judiciary and two surveys on public opinion were conducted. Finally, the internet and media campaign on the most important findings of our research and aspects of judicial reform was conducted.

Through such trial monitoring projects, civil society organizations strengthen their own capacities to monitor court proceedings in a professional manner and in accordance with international law standards, with a focus on the reliability of their reporting to relevant national and international bodies.

In accordance with the methodology and principles of trial monitoring that is conducted in many European countries, CeMI and CEDEM observers, within this project, consistently applied following principles of monitoring court proceedings: the principle of noninterference in court proceedings, the principle of objectivity, the principle of consent, with certain limitations that trial monitoring programs carry with them, which will also be presented. The subject of monitoring was criminal proceedings, throughout the insight into the case file and attendance at the main hearing. Random selection of cases was the fundamental method of monitoring (100% in the case of insight into the case file), while through the attendance at the hearings, the cases of the greater public interest were additionally monitored, especially concerning organized crime, corruption, terrorism, crimes against electoral rights, crimes against freedoms and human rights and citizen, human trafficking and war crimes (attendance at the main hearing).

The majority of the cases monitored by observers were the cases of the High Court in Podgorica (118 cases – 18.38%) and Bijelo Polje (41 cases – 6.39%), as well as the Basic court in Podgorica (116 cases – 18.07%) and Niksic (44 cases – 6.85%). Insight into the case files was conducted when the case was legally terminated in 2016, 2017, 2018, and 2019. The aim of this policy brief is to provide readers with a summary of the most significant findings made by CeMI and CEDEM observers through judicial monitoring activities, with the aim to assess the state of case-law in Montenegro concerning the application of both domestic legislation and international standards of the right to a fair trial. Conclusions and preliminary recommendations that are an integral part of the brief, based on identified shortcomings, suggest the implementation of appropriate measures aimed at achieving a fair and efficient judicial system in Montenegro to the relevant institutions.