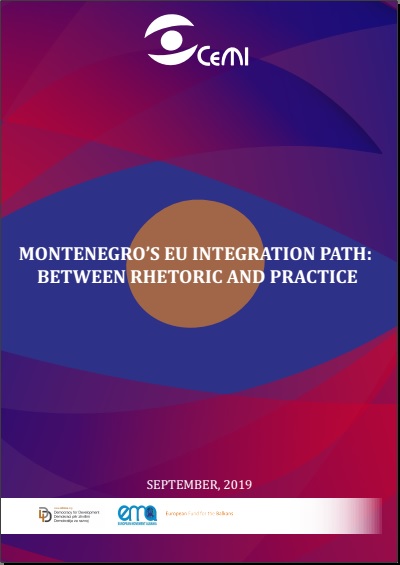 Montenegro started the most demanding phase of the European integration process, the accession negotiations for EU membership, in 2012. Since then, it has opened thirty-two negotiating chapters, out of which three have been provisionally closed, and changed a number of laws and strategic documents. Having in mind that Montenegro is the only Western Balkans’ country, alongside with Serbia, to negotiate membership in the EU, but also because of the dynamics of opening negotiating chapters (only the Chapter 8 remains to be opened), it is often called an EU accession front-runner. This position is also contributed by the fact that Montenegro has a small number of open issues and, in general, good relations with all its neighbours. Still, key reforms are missing, particularly in the form of implementing the adopted legal solutions and eliminating inappropriate political influence from the work of institutions. On the one hand, look¬ing in strictly technical sense, Montenegro did the most, compared to other Western Balkan countries, in meeting the formal prerequisites that make the accession process. On the other hand, such achievements have been challenged by constant criticism: by citizens, who do not notice any significant progress in their everyday life; by civil society organisations (CSO), through highlighting serious violations of laws and human rights in its reports; by the European Commission, which indicates in its 2018 Western Balkans Strategy that Montenegro shares same challenges with other countries in the region, including links of the political elite with organized crime groups. The country continues to face significant obstacles in meeting the EU requirements. The lingering issues which have widely characterised this process are: rule of law deficiency, week and strongly politicized institutions, followed by a slow speed of political transition and transformatuion of society which have ultimately led to the intern sification of political, social and economic structural problems.