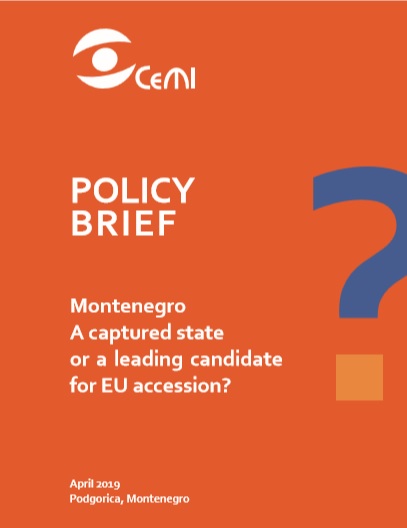 POLICY BRIEF Montenegro A captured state or a leading candidate for EU accession?

In June, Montenegro will officially mark the seventh year since the start of the of EU accession negotiations process. However, results expected to be achieved at this stage are limited, or at least debatable, with the country continuing to face significant challenges in meeting EU standards, while the civil society remains insufficiently included in the process. Rule of law deficiency, week and strongly politicized institutions, followed by slow speed of political transition and transformation of society have led to the intensification of political, social and economic structural problems, additionally marred by recent political affairs.

Parliamentary elections are due to be held in Montenegro in 2020, but without the foreseen and highly needed reform of the election legislation. In order to contribute to this process, CEMI formed a Citizens’ Council for Free and Fair Elections, consisted of representatives of political parties, nongovernmental sector, media, academic workers and university professors who prepared recommendations and are advocating for electoral legislation reform to be improved in line with the international standards and previous recommendation given by the OSCE/ODIHR, GRECO, as well as domestic election observation organisations. Considering the continuous political crisis and the inability of political actors to find common ground and achieve dialogue, this mechanism should be additionally supported.

Previous changes of the electoral legislation were a compromise between the ruling and opposition parties, rather than an attempt to develop a comprehensive and structural election reform, by developing an Election Code, through an inclusive and transparent process. This is one of the main reasons for numerous legal and procedural gaps in conducting elections in Montenegro, leading to almost traditional political crises after each election and a continuous decrease of voters trust in election processes.

In addition, media freedoms in Montenegro are under constant attacks and political pressure, as evidenced by a “no progress” mark in the last three European Commission reports. The EC reports specifically mentioned the RTCG dismissals and the attacks on journalists as issues expected to be addressed by Montenegro.

Concerning the legal and institutional framework for the work of NGOs, some improvements were introduced recently with regards to decentralised state financing, but results are yet to be seen. On the other hand, the cooperation between the Government and NGOs was at the lowest level last year, and there are no visible efforts for this situation to be changed in the near future. The highest point of cooperation backslide was reached after several most prominent NGOs (CEMI, IA, CRNVO and CGO) published a policy brief named “Montenegro between reform leader and reform simulacrum” showing that accession negotiation process is not a success story, as it was portrayed by state officials, through concrete examples of Government’s simulations of the reform processes. One of the recommendations proposed was a request to the EU to use all available mechanisms to accelerate reforms in Montenegro, including the balance clause, which was perceived by highest state officials as a direct attack on the Government and these NGOs and their leaders became targets of severe smear campaigns.

Western Balkans’ “frontrunner” toward EU made progress, in the technical sense, by opening one negotiation chapter (27 – Environment and Climate change), with a total of 32 out of 33 chapters opened and three chapters provisionally closed. However, direct results are not visible to citizens, who do not notice any progress in their everyday life, which consequentially results in a decrease of citizens support towards the EU and their growing dissatisfaction is evidenced by a number of protests last year, at all levels.