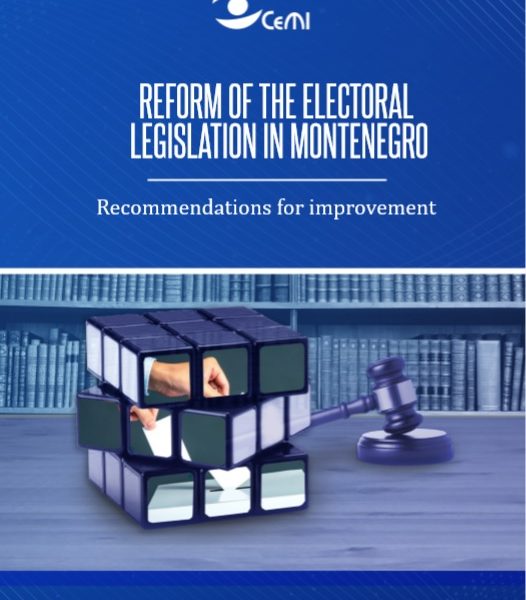 Reform of the Electoral Legislastion in Montenegro

Since its establishment in 2000, CeMI has been pointing out the need to reform the electoral framework. Unfortunately, Montenegrin legislators have never approached this issue with necessary care. Amendments to the electoral regulations took place on ad hoc basis, nontransparently as part of political negotiations caused by the then-current political crisis. Montenegro is entering the final phase of EU integration process, with the country’s electoral process being qualified as problematic. It is, therefore, no surprise that the EU considers free and fair elections to be one of the priorities for further progress in the accession process.

The boycott of parliament by several political parties has damaged citizens’ trust in institutions and blocked electoral legislation reform. Parliament’s boycott does not have the support of citizens and is supported by only 19.9% of respondents. The reform of the electoral framework is an imperative which should not be degraded to ‘political commerce’, but should be comprehensive and inclusive, as suggested by both the OSCE/ODIHR key recommendations and Montenegrin election monitoring organisations.

CeMI advocates for reform to include amendments of the electoral system. Although citizens do not have significant knowledge about electoral systems, over half of the respondents (i.e. 52%) think that voters should have the right to vote both for the party and the candidate. This choice is the closest to a mixed electoral system that combines proportional and majority methods. Even though CeMI emphasizes that the best solution for Montenegro would be to introduce a mixed proportional membership system similar to ones adopted by Germany and New Zealand, where the proportional method serves the as a correction of the disproportionality created by the majority method, a major step forward would be the introduction of open party lists where the voter could cast at least three candidates within the same list within one list. Lack of personalization of the electoral system would still block further democratization of Montenegrin society.

At CeMI, we believe that electoral reform should also tackle the issue of selection of candidates for parliamentary positions, which should be just as democratic as the election of party leadership. More than half of the respondents said it was necessary to legally bind parties to keep records of their members (party electorate), to introduce procedures for choosing party leadership directly by party members, and to introduce procedures for the democratic nomination of candidates for representatives. According to 62.8% of respondents, the party leadership should be elected in elections that could be attended by interested citizens (in theory known as open party elections), which is a big increase in regard to 2016 data, when 45.1% of respondents had the same attitude.

CeMI is committed to further professionalizing and de-politicizing the State Election Commission, municipal election commissions, and polling stations. The poll shows that 65.5% of respondents believe that the State Election Commission should consist of a combination of political party representatives and independent experts, dominated by experts. In the opinion of 74.9% of the respondents, the polling station should be composed of representatives of political parties and local administration officials combined. This study summarizes the findings obtained not only through this project, but also by monitoring the last three electoral cycles from 2016 to 2018. CeMI’s team believes that this study contributes significantly to the further process of electoral reform. The structure of the study follows the structure of the CeMI election monitoring reports that our organization publishes once the monitoring has been carried out. Recommendations at